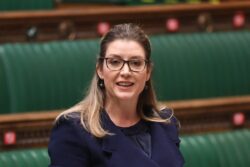 Tory leadership hopeful Penny Mordaunt has reportedly almost hit the 100 mark needed to make it to the next round in the race to No10.

Her team is suggesting she has the support of 90 Tory MPs, according to a source – though she has less than an hour to gain another 10 MPs.

Publicly, only 27 MPs have said they are backing Mordaunt whilst Rishi Sunak has the public backing of 194 MPs.

If Penny Mordaunt can gather another 10 MPs to back her she would make it through to the next stage – a vote among party members.

The source has urged other MPs to back her “for the sake of the party” adding it’s important that Tory members get the chance to select the next PM.

ERG won’t back Sunak or Mordaunt