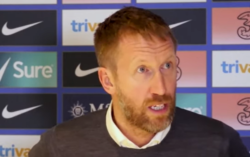 Graham Potter is under pressure with Celsea currently tenth in the Premier League (Picture; Beanyman Sports)

Chelsea’s board remain confident Graham Potter remains the right man to oversee the club’s rebuilding project despite a worrying run of form which has seen the Blues drop to tenth place in the Premier League.

The former Brighton boss was Todd Boehly’s No.1 choice to replace Thomas Tuchel following the popular German’s surprise sacking back in September.

Boehly’s decision appeared to have been vindicated after Potter masterminded a nine-game unbeaten start to his tenure but the wheels began to come off prior to the break for the World Cup and Chelsea have fared little better since the resumption.

Thursday’s defeat against champions Manchester City means Potter’s side have now taken just six points from the last 24 available in the Premier League and face an uphill battle to qualify for Europe next season.

An ever-growing injury list has hampered Potter and with Raheem Sterling and Christian Pulisic now set for lengthy spells on the sideline, Potter’s job is unlikely to get any easier in the short-term.

Previous owner Roman Abramovich had a reputation for sacking managers hastily – both Luiz Felipe Scolari and Andre Villas Boas failed to last more than eight months – Boehly is keen to take a different approach and, according to the Telegraph, retains full faith in Potter and wants to give him an opportunity to work with the squad he is keen to deliver.

Potter, himself, vehemently denied implications that he might not see out the season at Chelsea despite their disappointing record under his tenure.

‘The owners are billionaires so they’re quite smart,’ he said.

‘Smarter than me, that’s for sure. So they understand the challenges that we have and the direction we want to go in. I’ve been here four months and five, six weeks of that have been lost to international football.

‘I think Pep (Guardiola) was (at Manchester City) a year before they’d won anything, and then obviously Mikel (Arteta) and Jurgen (Klopp) took a bit of time.

‘But obviously it’s maybe different for me, for some reason. But I don’t put a timescale on it. I know the responsibility we have here.

‘But also I know that I am capable, and I know the quality that I have and I have the full support of certainly the owners, the players and the staff here. And you can see by the support we had (against City), it was fantastic, so there will always be people that doubt.

‘There’s nothing you can do, but certainly I’m not here to convince anybody. I’m here to do my I work and then if that convinces then that’s fine.’

The Blues have taken just six points from the last 24 available in the Premier League.