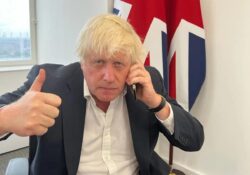 Monday’s front pages are dominated by the news Boris Johnson has pulled out of the race for No10 and now looks likely former chancellor Rishi Sunak is set to be the next Conservative party leader and prime minister.

The Times says Rishi Sunak could be named as the new prime minister as early as today, but quotes a source close to him saying that he was still not taking anything for granted.

“New PM in waiting,” says the Daily Express in describing the former chancellor. Whilst the Guardian says Rishi Sunak has been cast in the role of Tory “messiah” by some of his colleagues.

The paper’s opinion piece says Rishi Sunak will be facing a nightmare if he becomes the next PM and he will need political creativity and diplomacy to deal with it.

The Sun suggests that Boris Johnson stepped aside to avoid chaos: “Bojo: It’s a no”. The paper says he has huge charisma and talent but now is not the right time for him to return to No10.

The Daily Mail – another pro-Boris Johnson paper – praises the PM saying he demonstrated a “gesture of wisdom, honour and statesmanship,” and that his time will come again. It says “Tory leadership sensation” to describe Boris Johnson stepping aside.

Metro uses the headline “Boris has bottled it” and says Rishi Sunak is on the brink of becoming the next prime minister.

The left-wing paper Daily Mirror says the former prime minister has been left “humiliated” and that Britain is to appoint its latest “unelected PM.”

The i says Penny Mordaunt’s allies believe she can scoop up Boris Johnson’s supporters to make it past the 100 thresholds. She’s written in the Daily Telegraph saying she is ready to deliver unity, discipline, honesty and competency.

The Telegraph also carries the words of Jeremy Hunt who is backing Rishi Sunak – saying he can, in his view, be trusted to make difficult choices.

The Independent describes Boris Johnson’s withdrawal from the race as a “significant humiliation” and says he was forced to quit.