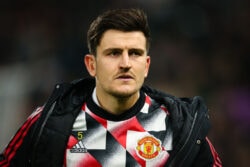 Harry Maguire has been linked with a move away from Man Utd (Picture: Getty)

Maguire lost his place in the United team before the World Cup but an impressive campaign in Qatar suggested he could force his way back into the side in the second-half of the season.

But the 29-year-old was benched for United’s recent games against Nottingham Forest and Wolves, with his England team-mate Luke Shaw playing as a makeshift centre-back instead.

And despite Maguire’s recent struggles, Pearce believes he would be a ‘brilliant’ signing for a number of Premier League clubs and says Newcastle United, Aston Villa and West Ham should all be keeping tabs on his situation.

‘If I was West Ham, if I was Newcastle, if I was Aston Villa, I’d be all over trying to get Harry Maguire out of there,’ Pearce said on talkSPORT.

‘I’d be asking the question whether he’s available. He’d be a brilliant addition to a football club.

‘He’s the right age, the right stature, right experience. He might just need another challenge now as he’s not getting regular football.’

Tony Cascarino, meanwhile, believes Maguire will be ‘incredibly disappointed’ with his latest omission and resigned to leaving Manchester United, either this month or in the summer.

The former striker added: ‘If you were Maguire sitting there as a centre-back and he’s got Luke Shaw in front of him, he will be thinking, “I’ve got to leave Old Trafford”.

‘He might say it’s a tactical decision for whatever reason. Diego Costa was up front for Wolves. You’d like to think Harry Maguire would like to battle with Costa.

‘They’ve won the game so it’s not been an issue. For Harry Maguire, he will only be thinking how he’s so far down the pecking order.

‘I think it will be very difficult to get Harry Maguire out. If it’s a loan it is more likely. At the end of the season, Maguire will look elsewhere. He’s playing for England and wants to be a regular.

‘Varane played in the quarter-finals of the World Cup and went deeper. He [Maguire] will be thinking “well he’s playing, it’s not a World Cup reason. I’ve been left out and Luke Shaw is in front of me”.

‘I think Harry will have to consider his future at Old Trafford. He will be incredibly disappointed. If Ten Hag is still the manager next summer then I don’t think he will want to stay.’

Manchester United have beaten Nottingham Forest and Wolves since the World Cup break to climb into the top-four of the Premier League. They return to action on Tuesday night against Bournemouth.

‘He would be a brilliant addition.’