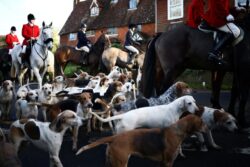 Activists staged a protest against an ‘inherently cruel’ Boxing Day hunt in Suffolk.

More than 40 protestors turned up holding placards reading ‘stand up for wildlife’ as hunters rode past them on horseback in Bungay, Suffolk, ITV reported.

It is the first time hunts have taken place in two years without the restrictions that were imposed due to the pandemic.

A petition by the Action Against Animal Cruelty group, which gathered more than 42,000 signatures, failed to stop the traditional parade which has been held in the town for decades.

It was branded ‘unnecessary, detrimental to wildlife and inherently cruel’ by a spokesperson for the group.

Anti-hunt campaigners also brought a town council motion to try and stop an event in the town square in Tiverton, Devon, which was rejected.

A petition is also calling for the hunt in Ledbury, Hertfordshire, to be banned.

However, the Countryside Alliance said: ‘It will be going ahead normally, with organisers taking extra precautions to protect spectators from a suspected protest.’

The meets were held as an animal welfare charity said that hundreds of ‘bloodthirsty and shameful’ suspected illegal fox hunting incidents took place the UK in just a month.

Around 200 packs of hounds have taken part in hunt across the UK today (Picture: Reuters)

Fox hunting was banned in 2004, but hounds can be trained to follow an artificial scent (Picture: Reuters)

The League Against Cruel Sports said new figures show there were 303 combined incidents of hunt havoc and illegal hunting in just five-and-a-half weeks between November 1 and December 7.

Fox hunting was banned in England and Wales following the introduction of the Hunting Act 2004, which came into force a year later.

But drag hunting, where hounds are trained to follow an artificial scent, is permitted under the legislation.

It is the first time people have gathered for the annual hunt without Covid restrictions in two years (Picture: Reuters)

Polly Portwin, Countryside Alliance’s director of the campaign for hunting, said: ‘Boxing Day meets bring thousands of people together: be it families, friends, neighbours or those within our community who may otherwise be isolated over the festive period.’

She added that many of those who attended the meets in public places ‘will have been supporting local cafes, shops and pubs which opened their doors to coincide with the hunt’s presence’.

It is the first time the hunt has taken place in two years without Covid restrictions.