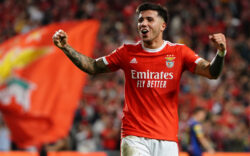 Manchester United and Liverpool are both eager to sign the Argentina international, who played a key role in his country’s World Cup success in Qatar.

Both clubs have held talks with Benfica over a move but the Portuguese giants have been adamant the midfielder will stay unless his €120million (£106m) release clause is met.

Chelsea entered the fray this week have informed Fernandez’s representatives and Benfica president Rui Costa that they are ready to pay that fee in full to land the 21-year-old star.

Fernandez has just returned to Lisbon following Argentina’s celebrations with Benfica resuming their campaign against Braga on Friday.

Speaking ahead of that game, Benfica boss Schmidt was asked if had pleaded with Fernandez to remain at the club until the end of the season.

While remaining coy on the subject, Schmidt appeared to suggest both he and the club had a major decision to accept.

Fernandez starred in the World Cup with Argentina (Picture: Getty)

‘When I talk to the players, these are things I keep to myself. What I can say is what I’ve already said. We all know what football is like.

‘I can advise them, but they only have one career. If I can convince them or influence them in a certain way, I try to do it, but I accept their decisions’.

Reports on Wednesday suggested Benfica were still fighting to keep Fernandez at the club until the end of the season, offering him an improved contract with Costa pointing to Chelsea’s disappointing position in the Premier League table with the Blues currently sat 8th.

But reports elsewhere suggest the club are already lining up a replacement for Fernandez with Racing Club’s Carlos Alcaraz and Velez Sarsfield’s defensive midfielder Maximo Perrone both on Benfica’s shortlist.

Latest comments from Costa would also suggest Benfica are now preparing for his exit, with the club president admitting they will not stand in his way should the clause be met.

Fernandez could be on his way to west London.