The Traitors star thought they would be ‘stopped by medic’ during brutal challenge: ‘I was fighting for my life’ 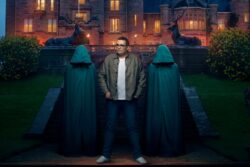 The Traitors star Rayan Rachedi thought he would be ‘stopped by a medic’ during a brutal challenge.

The 26-year-old trainee lawyer was banished from the gameshow, which saw Faithfuls Aaron Evans, Meryl Williams and Hannah Byczkowski win the cash prize after eliminating the ultimate Traitor Wilfred Webster.

The prize pot stood at £101,050 after a series of challenges throughout the gameshow, where Faithfuls and Traitors alike would compete to add more money to the fund.

One of the more physical challenges saw Rayan and the others rolling large barrels over the Scottish highland, most of it being uphill.

Reflecting on the mission, Rayan called it his ‘least favourite game’, saying: ‘Definitely the barrels mission – I was fighting for my life in there, they were so heavy and my task was to pull the biggest one (not push) to get it back on course every few metres, which really ruined my hands!

They added another £8,000 to the prize pot (Picture: BBC/Studio Lambert Associates/Llara Plaza)

‘I genuinely thought the medic was going to stop me that day!’ (Picture: BBC/Studio Lambert Associates/Llara Plaza)

‘I genuinely thought the medic was going to stop me that day!’

In another challenge, Rayan was buried alive while his teammates had to find his grave and dig him out.

At the time, Rayan looked incredibly anxious, however while answering questions from viewers on social media, he’s since revealed: ‘What helped massively is hearing about all the safety mechanisms they had put in place and chatting to Claudia [Winkleman] off camera who really helped reassure me before it happened.’

During another mission, Rayan was buried alive (Picture: BBC/Llara Plaza)

The contestants managed to get the prize pot up to £101,050 ahead of the final (Picture: BBC/Llara Plaza)

Elsewhere, Rayan admitted his dream to return to the gameshow after rumours of a celebrity version, saying: ‘I think it’s highly unlikely to be more than a dream and I don’t think I would be called back for an All Stars version but I would sell my firstborn child’s kidney to do this again as a traitor,’ having claimed he would do it all over again but ‘pitch’ better to host Claudia so he could have been picked as a Traitor.

Which contestants would you want to see return for a second series?Comment Now

His comments follow claims that the BBC are believed to be green lighting the next season of The Traitors with famous faces taking part.

A TV insider has claimed that the broadcaster is ‘thrilled’ with how much love there has been for the show, and that a celebrity version would be ‘a natural next step’.

‘Viewers will get to see different sides of some big names as they try to manipulate others or uncover the truth about fellow players,’ they told The Daily Mirror.

Rayan revealed himself to be a Faithful after being banished from the game (Picture: BBC)

The celebrity version is believed to be planned as a charity edition for either Children in Need or Comic Relief.

The Traitors is streaming on BBC iPlayer.


MORE : The Traitors winner Meryl Williams hounded by sick bullies who ‘laugh and film’ her: ‘I don’t leave the house on my own’