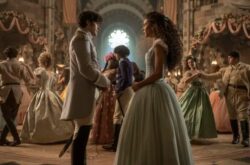 Tedros, on the left, has much, much lighter hair in the books (Picture: Netflix)

The School for Good and Evil, Paul Feig’s new fantasy film, has upset fans of the book it’s based on after changing the colour of a character’s hair.

The Netflix production, which has been in development since before the pandemic, was made available to stream earlier this week on October 19.

It follows the story of two friends, Agatha (Sofia Wylie) and Sophie (Sophia Anne Caruso), who attend the titular school for heroes and villains.

The School for Good and Evil has received a mixed reception from film critics so far, but fans of the book seem generally satisfied on social media.

However, a small section of the book’s fandom were left feeling very unhappy when they noticed that a principal character had brown hair rather than blonde.

Tedros, a blonde character from the books, was played by newcomer Jamie Flatters, a brown-haired actor, in the movie.

‘Why the hell isn’t Tedros blonde?’ one fan commented on social media, echoing the sentiments of many others who voiced their displeasure.

Another fan commented: ‘Fuming. They made Tedros have black hair and not blonde. Why? What was the reason?’

Soman Chainani, the author of The School for Good and Evil, explained that she discussed Tedros’ hair colour with the actor before shooting began.

Others defended the film, however, with one fan saying: ‘Tedros was blonde in the book? Well I’m glad they didn’t go through with that in the movie adaption.’

Jamie & I have discussed this in detail haha. Whoever asks me this at a Q&A in person at a NY or LA event, I will give you the answer ðð½ https://t.co/qh8JmCyqYy

Another said: ‘I couldn’t care less if Tedros doesn’t have blonde hair anymore, my man’s is still f****** hot as hell.’

The film currently holds a rating of 38% on Rotten Tomatoes, based on reviews by 45 critics, with an average overall rating of 4.9 out of 10.

Watch The School for Good and Evil on Netflix.


MORE : Is The School For Good And Evil based on a book?


MORE : Harry Potter coin collection is first to feature both Queen and Charles

The book’s author has defended the decision.