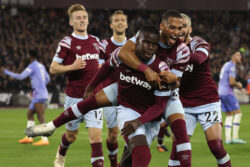 Bournemouth were on the wrong end of a VAR double-whammy as West Ham moved into the top half of the Premier League table last night in controversial circumstances.

First, the Cherries were punished on the stroke of half-time as VAR Mike Dean ruled Thilo Kehrer’s handball in the build-up to Kurt Zouma’s opening goal was accidental.

Then, Jordan Zemura was rather harshly penalised for handball in second-half stoppage-time, allowing Said Benrahma to bag his side’s second from the penalty spot.

Zouma’s headed flick, as he got the last touch to a goalmouth scramble following a corner, broke the deadlock but his central-defensive partner Kehrer had handled.

Dean gave the goal, however. Cherries caretaker-boss Gary O’Neil was booked for his protests at the break.

He awarded a spot-kick and Benrahma converted to move the Hammers up to tenth place. The Cherries are 14th.

More controversy for the video ref.