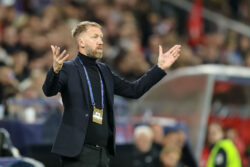 Joe Cole has sent a warning to Chelsea boss Graham Potter that ‘the challenges will come in the new year’ for the west London club.

Potter has enjoyed a strong start at Stamford Bridge since he arrived from Brighton in September to replace Thomas Tuchel and is yet to lose a match.

Across his first nine matches in charge, Potter has led Chelsea to six wins and three draws across fixtures in both the Premier League and Champions League.

Following Tuesday’s 2-1 win at Red Bull Salzburg, Chelsea have five more games before the season is put on hold for the World Cup in Qatar.

Cole, though, thinks that things will get harder for Chelsea following their clash with Bournemouth on December 27 when we enter 2023 – with the Blues facing champions Manchester City and top four rivals Liverpool in January.

‘He’s come into the club, he’s given everyone a fresh start,’ Cole told BT Sport when quizzed about Potter’s first few games in charge.

‘Players like Kepa [Arrizabalaga], he’s come into the fold. For me, the first 10 games were the danger for Potter.

“The challenges will come in the new year!”@seemajaswal gets the group’s thoughts on how Chelsea manager Graham Potter has coped so far in his new role… ð

‘It’s a long-term appointment. That’s for sure. Chelsea traditionally go for a big name for immediate success but these new owners, they want to build the club.

‘The first [nine] games, he’s had a look at everyone. He’s made five changes on multiple occasions. He’s brought everyone in, it’s a happy camp at the moment.

‘The challenges will come in the new year, when he gets to the business end [of the season] when he starts to settle on a team.

‘He’s left Mason [Mount] out tonight, the first time he has left him out. He’s looked at different systems.

‘But he has done so well with managing the squad in these early stages, while still getting results. That is very difficult.’

Some big games coming in January…