The Apprentice: Where is 2022 winner Harpreet Kaur now? 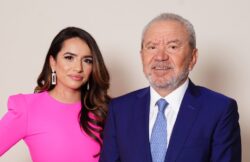 The Apprentice is back for another season with 18 candidates battling for a £250,000 investment from Lord Alan Sugar.

Judging by the sneak peek, the producers have really pushed the boat out this season as the first task sees the hopefuls heading to the Caribbean Island of Antigua, where they’ll be creating and selling excursions to tourists.

Back in the UK, a series of challenges await them, including creating cartoons, hosting immersive events, entering the world of male beauty products and getting to grips with the street food industry.

The business reality show has been going on the BBC since 2005, with Lord Sugar fronting the show from the start with his original aides, Margaret Mountford and Nick Hewer.

The programme has several winners becoming household names in the business industry, but what has series 16 winner Harpreet Kaur been up to following her show victory?

The 31-year-old  became Lord Sugar’s latest business partner after her tasty dessert parlours won him over, and held a launch party in Bradford for Oh So Yum!

Shortly after her win, Harpreet expressed her hopes for her dessert business to sweep the nation, as she looked to charm the UK with her tasty treats.

And she’s done just that, as she recently shared that Oh So Yum! has also launched in Selfridges in Birmingham and Manchester!

The Apprentice fans were also stunned to learn that she is currently dating her former co-star Akshay Thakrar.

In August last year, the loved-up couple shared three photos of the pair together, with the caption: ‘The best things in life happen unexpectedly ❤️.

‘I love sharing my Oh So Yum business journey with you all but this time….it’s a personal one 🥰.

Harpreet continued: ’Since coming out of The Apprentice house, my life has been a complete whirlwind in more ways than one.

WWE is bringing Money In The Bank to London in 2023: Tickets and date for historic show

‘Over the past three months, a special someone has swept me unexpectedly off my feet & I cannot wait to see where this journey takes us ❤️ @akshay.thakrar.’

Fans of the entrepreneur, as well as other The Apprentice stars, quickly responded to the sweet update, with Amy Anzel writing: ‘Ah such lovely news! Congrats guys.’

The Apprentice returns tonight on at 9pm on BBC One.


MORE : Everything you need to know about The Apprentice 2023 – From start time to full list of candidates


MORE : Lord Alan Sugar lashes out at Gordon Ramsay for ‘ripping off’ The Apprentice with cooking show: ‘He should stick to his day job’

Harpreet is the latest winner!