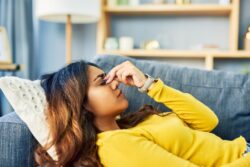 Shot of a young woman experiencing a bad headache while relaxing at home (Credits: Getty Images)

Be honest: when you go to the toilet, do you take your smartphone in with you?

Having the ability to browse social media or watch content from YouTube or Netflix in seconds means the concept of boredom is a distant memory.

But according to the experts, filling every spare second of the day with distraction may not be for the best.

That’s because when we enter a ‘profound’ level of boredom, our brains actually use that time to come up with innovations and ideas.

‘Profound boredom may sound like an overwhelmingly negative concept but, in fact, it can be intensely positive if people are given the chance for undistracted thinking and development,’ explained Timothy Hill, a sociologist at the University of Bath in the UK.

‘We must recognize that the pandemic was a tragic, destructive, consuming experience for thousands of less fortunate people, but we are all familiar with the stories of those in lockdown who found new hobbies, careers, or directions in life,’ Hill said in a press release.

Be honest, do you check your phone while you’re on the toilet? (Credit: Getty)

Hill’s team conducted research using 15 people who were given paid time off or worked from home during the pandemic. The participants took part in structured interviews detailing how they spent their time.

They found that, when boredom arrived, people attempted to quell it with social media and doomscrolling.

However, when the boredom grew deeper and became even more uncomfortable, there was a renewed push to counter it with some sort of fulfilling passion.

The researchers found that carpentry, baking, and cycling were all either discovered or rediscovered during the pandemic.

Social media and doomscrolling are causing us to be less creative and innovative, according to scientists (Credit: Getty)

‘The problem we observed was that social media can alleviate superficial boredom but that distraction sucks up time and energy, and may prevent people progressing to a state of profound boredom, where they might discover new passions,’ said Dr Hill.

The full study, Mundane emotions: Losing yourself in boredom, time and technology, has been published in the journal Marketing Theory.

‘This research has given us a window to understand how the ‘always-on’, 24/7 culture and devices that promise an abundance of information and entertainment may be fixing our superficial boredom but are actually preventing us from finding more meaningful things,’ Dr Hill continued.

‘Those who engage in ‘digital detoxes’ may well be on the right path,’ he said.

Metro.co.uk writer Beth Ashley attempted a digital detox back in October. Here’s how she got on.

According to the experts, filling every spare second of the day with distraction may not be for the best.