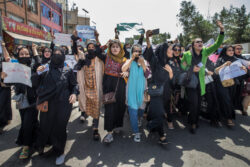 Aljazeera says Afghanistan’s Taliban-run higher education ministry has said that female students would not be allowed access to the country’s universities until further notice.

A letter, confirmed by a spokesperson for the higher education ministry on Tuesday, instructed Afghan public and private universities to suspend access to female students immediately, in accordance with a Cabinet decision.

“You all are informed to immediately implement the mentioned order of suspending the education of females until further notice,” said a letter issued to all government and private universities, signed by the Minister for Higher Education, Neda Mohammad Nadeem.