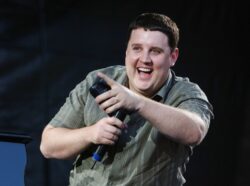 In sweet scenes, Peter Kay helped a Norwich couple get engaged during a recent gig in Birmingham.

The comedian, who has made a performance comeback by embarking on a mammoth tour around the country, was dressed as Santa as he invited Steve Drury, 53, onto the stage.

Steve went on to pop the question to partner Stephanie Mann, 55, in front of the packed Utilita Arena crowd earlier this month, after reaching out to Peter before the show.

After leaving his seat for a moment, Steve passed a note to an usher with hopes it would be given to the comedian.

According to Steve, Stephanie had always joked she wanted a ‘big’ proposal, and that only exacerbated his nerves as the show went on.

It was reported the couple were called up on stage under the guise of doing karaoke, allowing Steve to propose in front of the crowd.

The comedian is currently on a mammoth tour of the UK (Picture: Getty)

He then asked for the crowd to give a ‘big cheer’ to the happy couple, as they celebrated on stage.

While all’s well that ends well, Steve revealed his nerves came through strong as he prepared to propose.

Explaining the lead-up, he said, via Mail Online: ‘Peter was reading out my letter and Steph didn’t know what was going on. I had to keep talking so she wouldn’t hear him.

Tickets have been in high demand, with the comedian adding more shows (Picture: Jon Furniss/WireImage)

‘I told her we were doing karaoke. She’s a lovely voice but she looked terrified when he handed us both a microphone.’

He added: ‘[Stephanie] was so shocked she didn’t say “yes” straight away – Peter had to prompt her.

‘That was a bit scary but the whole thing was fantastic. So many people congratulated us and offered selfies.’

It’s something Stephanie said she’ll always remember, adding it was ‘so nice’ of the comedian to allow the proposal to happen during his gig, with the pair feeling ‘honoured’ by the moment.

The Car Share star has embarked on a blockbuster comedy tour of the UK, which is his first in 12 years, which also includes the first residency at the O2 Arena in its 15-year history.

Demand for the shows has been so large, Peter has been forced to add further dates to his mammoth Better Late Than Never Tour on several occasions.

He had previously cancelled his tour in 2017 due to ‘unforeseen family circumstances’ and had largely kept away from the spotlight in the intervening years.

His 2010 tour became the highest-selling comedy tour of all time after selling 1.2million tickets, and it looks like Peter is following in those record-breaking footsteps once more.

Grabbing headlines all over again already, Peter was moved to tears by the crowd on his tour’s opening night in Manchester at the start of December.

The stand-up icon has been left overwhelmed by the response to his tour, describing his first set of gigs as ‘incredible’ and ‘such a happy experience’.


MORE : Peter Kay ‘donates £14,000 to children’s charity for Christmas’ to represent every sold out ticket at first O2 London gig


MORE : Peter Kay ‘can’t believe’ he was in a music video with Jimmy Savile: ‘Dirty s***house!’

This is so sweet!