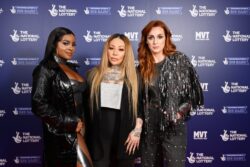 The trio, who made up the group’s original line-up between 1998 and 2001 of Mutya Buena, Keisha Buchanan and Siobhan Donaghy, lost the right to record and perform under the name following a number of radical line-up changes.

After briefly reforming under the moniker MKS around 2013, they regained the right to use the Sugababes name in 2019.

Following a successful comeback year which has seen them embark on a UK tour and perform a packed-out set at Glastonbury, the girl group have released The Lost Tapes to thank those who have supported their journey.

In a post on Instagram, the trio wrote: ‘This has been a year of incredibly positive moments for us as a band. We wanted to do something to say a huge thank you to everyone who has supported us on this journey.

‘We wrote this album almost 8 years ago and remember the magic we felt at the time.

‘For various reasons beyond our control it didn’t get an official release, so it’s with great pride that The Lost Tapes gets a fully independent release from us today.’

‘The 13-track offering features songs which were previously leaked as demos and was written by the group alongside music stars including MNEK, Sia and All Saints’ Shaznay Lewis.

We are so here for the Sugababes renaissance (Picture: Alamy Stock Photo)

Sharing their very excitable reactions to The Lost Tapes, diehard Sugababes fans have set social media alight, unable to contain their joy after waiting almost a decade for the tunes.

One person tweeted: ‘The new old @Sugababes album is SO good. Wistful bops, magical harmonies, songs written with MNEK and Shaznay Lewis. A true Christmas miracle to have it officially released at last!’

‘Sugababes releasing music, 12 year old me is living’, wrote another.

Listening to No Regrets as intended on The Lost Tapes makes me sooo happy! Iâve loved the ripped acoustic version for sooo long, so Iâm dead thrilled to hear it in all its glory. Well done @Sugababes, what a fab new Xmas release!

Sugababes really do have 3 of the most unique voices, the harmonies >>>>

What’s your favourite song from The Lost Tapes?Comment Now

One excited fan tweeted: ‘This is (and I’m not being dramatic when I say this) the best Christmas Eve ever. From today, we will no longer call this day Christmas Eve. It will now be called #Sugababes Day: The day of our patron saints Mutya, Siobhan & Keisha.’

Sugababes were formed in 1998 by the manager of All Saints and went on to score six number one singles.

In October 2019, the group released their first music in six years, a cover of the UK garage classic Flowers by Sweet Female Attitude.

Earlier this year they played The Avalon stage at Glastonbury but the area had to be closed off after thousands more fans than expected arrived to watch the trio perform hits including Overload and Push The Button.

The girl group plan to tour Australia next year and will perform a one-night-only show at London’s O2 arena on September 15 2023.


MORE : The Muppet Christmas Carol songwriter Paul Williams on working with Sir Michael Caine and his muppet ‘family’ and the ‘tsunami’ of fan support