Strictly Come Dancing: Where is Hamza Yassin from and is he married? 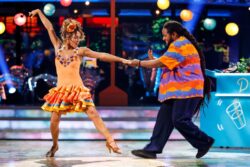 Hamza has been lighting up the show with his smile and moves (Picture: Guy Levy/BBC)

CBeebies and Countryfile presenter Hamza Yassin has taken the 2022 series of Strictly Come Dancing by storm.

After coming top of the leader board after the first live show, Hamza has continued to grow and impress in the competition.

Last week he dazzled the judges with a jaw-dropping salsa, landing a near-perfect score with dance partner Jowita Przystal.

Hamza’s as cool as cucumber, previously telling Metro.co.uk that he’s not feeling the pressure.

‘We’re taking one week as it comes really,’ he said. ‘Each week is our final week as such and we’re kind of aiming for it to be just as good as last week, but we don’t have the pressure of being on top of the leaderboard or anything along those lines, which is kind of a good thing.’

The wildlife cameraman, who also stars on Animal Park and appeared on the CBeebies show Let’s Go for a Walk as Ranger Hamza, admitted that his dance skills before starting his Strictly journey were ‘currently at the level of “1970s disco vibe”.’

He added that he’s ‘ready to work hard and will be shaking it every time I get the chance’, adding: ‘Shake it ’til you make it!’

Well, the hard work has paid off so far, so let’s get to know one of this year’s strictly favourites…

Where is Hamza Yassin from?

He’s shown off his highland homeland in recent documentaries, taking part in the Channel 4 documentary Scotland: My Life in the Wild as well as Scotland, Escape to the Wilderness.

Hamza has a degree in Zoology with Conservation after studying at Bangor University and a Masters in Biological Photography and Imaging from the University of Nottingham.

Hamza stormed to the top of last week’s leader board (Picture: PA)

Hamza tends to keep his private life away from the camera, and not much is known about his relationships, although it appears he is not married.

His social media feeds are instead dominated by wildlife photography, capturing all the wonders of the natural kingdom, as well as updates on his TV work.

Strictly Come Dancing continues tonight at 6.40pm on BBC One.

We still can;t get over his salsa.