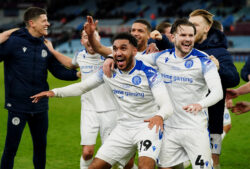 Dean Campbell left the Stevenage bench to cause a huge upset as the League Two high-fliers stunned Aston Villa and sent their hosts crashing out of the FA Cup, with two late goals setting up a fourth-round tie at Stoke.

The drama started in the 85th minute at Villa Park when Leander Dendoncker was sent off for a foul on Campbell which referee Craig Scott initially ruled was outside the area.

The spot-kick was awarded after VAR was consulted and was converted in the 88th minute by Jamie Reid, who sent goalkeeper Robin Olsen the wrong way.

Then Campbell sent the travelling fans into delirium with an angled finish two minutes later to leave the Premier League club in despair.

Stevenage defended stoutly throughout despite falling behind in the 33rd minute when Morgan Sanson fired in his first Villa goal after a flowing move.

It took Unai Emery’s side 15 minutes to produce their first shot on target when Douglas Luiz was denied by Taye Ashby-Hammond. Stevenage then had the ball in the net but the effort from Danny Rose was ruled out for offside after a VAR check. The underdogs were close to equalising before the break when Luke Norris hit the bar with a curling shot from out wide.

Villa dominated play but missed numerous chances with Calum Chambers failing to convert a glorious opportunity to double the lead shortly after the break. It proved particularly costly as battling Borough refused to cave in, turning the tables and causing the biggest upset of the third round.

Stevenage boss Steve Evans said: ‘It is really special. The chairman just said to me it’s the greatest day in his life.’