It’s been a nightmare start for the Ashes 2021 Downunder at the Gabba Brisbane. England cricket suffered a humiliating start as they were bowled out for 147 after winning toss and batting first, in the first Test, on day one, in Brisbane.

After winning the toss and electing to bat England have been dismissed for 147 on the stroke of tea.

Mitchell Starc removed Burns with the first ball of the match.

In the last 100 years, it is England’s sixth-worst score when batting first in an opening game of a series. That is all Test cricket, not just the Ashes.

It is their worst start to an Ashes when they have batted first since 1958-59 when they were bowled out for 134 at Brisbane.

A stand of 52 between Ollie Pope and Jos Buttler was the only point England even threatened to come into the contest.

Shortly after England were dismissed a storm arrived and the rain is still pouring down. Could this be a saving grace for England? The Ashes 2021 campaign needs a bit of luck. Weather forecasters are predicting that if the rain stops as predicted we could restart the game and play beyond 7 am UK time if it stops. It might work to England’s advantage because they’ll have a nasty little session in Australia.

Terrific start for the Aussies & the skipper @patcummins30 with his 5 fa. Eng are still in the game if they can knock over Australia for less than 285. Plenty in the pitch. Robinson the key to England taking early wickets @FoxCricket ! One feels Eng needs Aust 4 down tonight. 👍 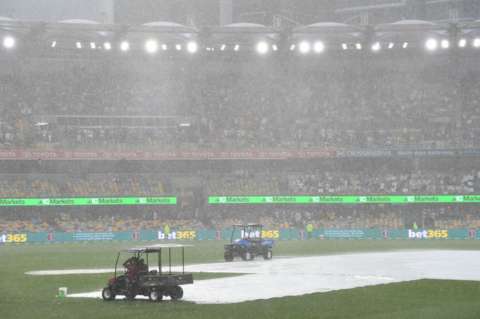