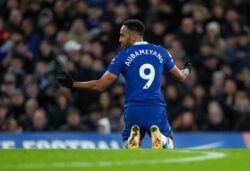 Pierre-Emerick Aubameyang could be headed for the Chelsea exit after just five months in west London (Picture: Getty)

Pierre-Emerick Aubameyang could be offered a Spanish escape route after just six frustrating months at Chelsea.

The former Arsenal captain joined the Blues on the final day of the summer transfer window having been deemed surplus to requirements by Barcelona.

Aubameyang signed for the Catalan giants a year ago but their dire financial plight, allied to the signing of Robert Lewandowski, forced Barcelona to accept Chelsea’s modest £12million offer.

The 33-year-old’s disappointment at being forced to leave Barcelona was largely offset by the opportunity to reunite with Thomas Tuchel, but the German was ruthlessly sacked by Todd Boehly within a week of Aubameyang arriving at Stamford Bridge.

Still, Aubameyang started his Chelsea career with a bang, scoring three times in his first five appearances but his form has deteriorated rapidly in recent months and hasn’t found the back of the net since early October.

Graham Potter maintains his relationship with Aubameyang remains intact despite hauling him off during last week’s defeat against Manchester City, having only introduced him as a fifth minute substitute following an early injury to Raheem Sterling.

Aubameyang subsequently missed Sunday’s FA Cup drubbing against the same opposition with a back injury, according to Potter, and will face a fitness test to determine whether he will be able to feature against Fulham in tomorrow night’s west London derby.

Joao Felix is due to undergo his Chelsea medical having flown to London on Tuesday (Picture: El Chiringuito)

According to the Daily Mail, however, Aubameyang may already have played his last game for Chelsea with several La Liga clubs interested in bringing the once prolific striker back to Spain.

Atletico Madrid are in need of a new forward with Joao Felix set to join Chelsea on a six-month loan with Todd Boehly prepared to sanction a £10million deal which will not include a purchase option.

Felix flew into London on Tuesday ahead of a medical which will not have taken place in time for him to be able to make his debut at Craven Cottage.

Felix’s move is said to have no impact on Aubameyang’s role in the Chelsea squad, but former Arsenal star Paul Merson feels the writing is on the wall for the former Premier League Golden Boot winner.

Merson said: ‘I think Aubameyang will now be moved on. I think they will cut their ties with him.

‘As soon as you are sub-subbing a 30-something player, I think that is probably the end. Maybe you can get away with it with a younger player, but in football it’s one of those unwritten rules. It’s a don’t-do.

‘But Potter did it with him at 33 and, for me, I think he’s done. It’s an example of why recruitment is such a big problem for Chelsea.’

The curse of the No.9 lives on.