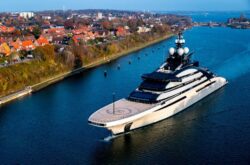 South Africa said it won’t seize a sanctioned Russian oligarch’s superyacht – instead allowing it to dock in Cape Town.

The $521m yacht belongs to Alexei Mordashov – an ally of Vladimir Putin. The yacht had left Hong Kong earlier in the week.

South African opposition leaders have called on the government to seize the yacht called The Nord.

But a spokesman for President Cyril Ramaphosa said he saw “no reason” to comply with Western sanctions.

“South Africa has no legal obligation to abide by sanctions imposed by the US and EU,” Vincent Magwenya told reporters.

“South Africa’s obligations with respect to sanctions relate only to those that are specifically adopted by the United Nations,” Mr Magwenya added, noting that Mr Mordashov is not under any UN-sponsored sanctions.

Mr Ramaphosa’s government has not directly criticised Russia, abstaining in several UN votes that have expressly condemned the war.