Smash horror film Smile was ‘never supposed to be released in cinemas’ before $200,000,000 box office success 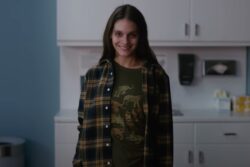 There is no doubt that Smile is one of the cinema success stories of 2022, with fans heading out in their droves to be scared silly by Parker Finn’s directorial debut.

The horror flick focused on Dr Rose Cotter (Sosie Bacon) witnessing a traumatic incident involving a patient, before being plagued by ‘frightening occurrences’ that no one else could see.

Soon after the appointment, she was haunted by visions of an eerie smile everywhere she turned, forcing her to confront issues in her past, or lose her life in terrifying circumstances.

Much of the popularity came from word-of-mouth – and high praise from Stephen King – as movie-goers quickly encouraged everyone they knew to run to the big screen, and it quickly soared to a box office success of more than $200million.

However, speaking to Metro.co.uk ahead of the home entertainment release, Kyle Gallner, who played Rose’s ex-boyfriend Joel, revealed that the flick was only meant to be on streaming, before plans changed.

We dare you not to be terrified by this smile (Picture: Paramount)

When asked about whether the reception met his expectations, he confessed: ‘We weren’t expecting anything! The movie was never supposed to go to theaters. It was made for Paramount+, it was only supposed to be on TV. Then they told us it was going to theaters and we were all excited.

‘It started taking off and it was pretty wild. You just never know what is going to hit and what will resonate with people these days. Superhero movies are the only sure thing, everything else is a gamble.

‘The only thing that’s a really safe bet anymore, other than superhero movies, is horror.’

‘One of the challenges these days is just getting people to go to the movies,’ he continued. ‘But once they’re there, you realize why it’s so great, why it’s so fun and the magic of going to the theater. Especially a horror film.

‘Seeing a horror film in theaters is one of the most fun things you can do, maybe people were just reminded of that?’

According to the Hollywood Reporter, the decision to release Smile in cinemas instead of the planned Paramount+ premiere was down to the hugely successful first test screening – and the rest was truly history.

Judy Reyes, who played Victoria Munoz, told us that she isn’t normally a fan of horror films, but jumped at the chance to get involved with Parker’s debut.

She managed to get her scenes completed in just one day, with her character somehow coming out unscathed.

Discussing why she felt that people managed to connect to Smile, the Scrubs icon suggested: ‘People can relate to it, particularly in these times.

‘It’s a volatile, vulnerable time that we’re living in. Particularly after Covid-19. All of that starts f**king with you, right?

‘Not only was this a fantastically well done and well-written horror film by Parker Finn, it’s also uncomfortably relatable – given where we are now and where we’re coming from. I think that is making a difference to the entire audience.

Top 10 films of 2022 – from Black Panther: Wakanda Forever to Matilda The Musical

‘It’s something, “Could it be? Would that happen to you?” It just sparks the conversations that you want a horror film to spark.’

Parker teased that we could possibly get a sequel on our hands, so expect more scares and heap more smiles…

Smile is available to download and keep now, and on 4K Ultra HD, Blu-ray and DVD on December 26.


MORE : The Traitors viewers in tears as Andrea chokes up in emotional exit after being murdered