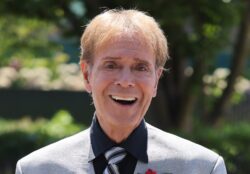 Sir Cliff Richard has outlined the 10 foods he’s cut from his diet while sharing the apparent key to his longevity.

The 82-year-old singer – who is still releasing hits and recently went head-to-head with Stormzy for the number one album – is a fan of the so-called ‘Blood Type diet’ which, while not backed by scientific evidence, involves adjusting one’s diet according to blood type.

Despite the contested effectiveness of the diet, Sir Cliff is a fan and thinks this approach to his health is what’s behind his longevity in the music industry.

The singer, who is blood type A, should you be interested, said: ‘There are 10 things [I can’t have]. I can’t have dairy or wheat. No red meat. No crustaceans. No mangoes, papayas or bananas. No potatoes, tomatoes. And aubergine. And you know, when you look at a list of foods that exist, giving up 10 of
them is not that difficult.’

While we’d disagree and call for people to try and pry the cheese from our hands and see how far they got, Sir Cliff does concede he still misses some of the things that he’s cut from his diet.

He told Boom Radio: ‘Tomatoes are probably the thing I miss most because some of the great curries I made with tomato puree. Some of the great pastas have tomatoes on it, but there’s so many different ways of having pasta.

‘You just have to be careful when I’m choosing Indian food. But you know, I’m allowed to have a treat now and then.

‘But if I’m gonna have a treat, it’ll be a steak, about four a year. But I look forward to the day. You have to plan your sin.’

Here is our gentle reminder that food is not a sin, people.

Still, Sir Cliff added he was evidently ‘doing something right’ and noted he also took a wide array of vitamins, joking ‘one or two of them are keeping me alive and I don’t know which ones they are’.

But what is this Blood Type diet palaver?

It’s been around since the 90s and was developed by naturopathic doctor, Dr Peter D’Adamo. It encourages people to consume food in line with their blood type, which is considered to be what’s best for the body, and less food that could potentially harm it.

As well as being based on ‘ancestral eating habits’, the blood type diet is about eating more fresh food and less processed food (which, to us just sounds like a balanced diet, really).

Take it with a grain of salt, though, as there aren’t any peer-reviewed scientific studies or evidence to support the diet and its effectiveness has long been debated.

He credits his diet to his longevity.