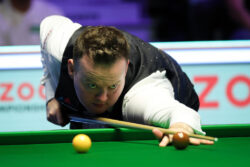 Shaun Murphy is heading to the Masters in confident mood (Picture: Getty Images)

Shaun Murphy is feeling good, looking good and playing well ahead of the Masters, but has a huge task ahead of him in Neil Robertson, who he rates as maybe the best all-round player ever.

Looking at the Magician’s results so far this season would suggest he hasn’t conjured up anything miraculous, but Murphy has been playing some really good stuff and looks to be moving towards top form.

The former world champ has run into some players at their peak, while he has come within a whisker in other matches, but his game is returning to its best as he hunts down his first big title since 2020.

‘I’ve been playing well all season,’ Murphy told Metro.co.uk. ‘I’ve made a couple of little changes since the end of last season and they’re starting to come to fruition and the game has turned a corner.

‘I could have, but for a super human performance from [Jack] Lisowski, been in the mix in York. Same with [Scott] Donaldson in Edinburgh, and I had the game won against [Mark] Selby in the English but for a moment of madness from me [missing match ball black].

‘My game is trending in the right direction though, I think something is coming, whether it’s this week I don’t know.’

The biggest change since last season has been the 40-year-old’s dramatic weight loss after gastric sleeve surgery, with the Magician loving the impact of the changes.

‘I’ve lost well over four stone in weight since the end of last season as well. I feel like a different person,’ he said. ‘It’s been an incredible physical change which has really helped me as a player. I’m just waiting for the stars to align, maybe my opponents having a slightly off day, but it’s all coming together.

‘It’s all been positive. There has been a relearning of some technique. I can now reach shots I couldn’t. I feel a lot more comfortable out there under the spotlight in my suits and just feel a lot better about things.

‘The thinner you are the flatter you can get on the shot, it’s a more textbook position. Without realising, I’d slipped out of that over the years as the weight crept on. I’m delighted I’ve turned my life around really and just waiting for it to show itself in terms of results.’

As for the other changes, Murphy has gone back to the SightRight methods which he has used in the past, and remained an ambassador for, but has unintentionally slipped away from.

‘Everyone knows I’m a SighRight ambassador and was an early adopter of those methods,’ he said. ‘Just over time you look at other stuff and the old habits crept back in a bit and I’ve reverted to my original, pre-SightRight sighting position. But over the summer I re-educated myself and that’s made a difference.

‘Then just a couple of more gameplay strategies have made a difference as well.’

Murphy is feeling as confident in his own game as he has in a long while (Picture: Getty Images)

Murphy is looking to strike the right balance between attack and defence, between showmanship and pragmatism, which is a tightrope he has always struggled to walk.

The aforementioned simple black he missed to beat Selby at the English Open stands out to the world number 11 as an example of being too comfortable.

‘I always look at my average shot time, with the general rule of thumb being the lower that is the better I play,’ he said. ‘But that black I missed against Selby at the English, it’s mad to say, but I just didn’t give that ball due care and attention.

‘My rhythm was good, average shot time good, but that little moment I could have just done with an extra breath and made sure I potted the ball. It’s such a fine line between doing what you know leads to a good performance versus making sure the ball goes in the pocket.

‘The same goes for playing your natural game, trying to be attacking, having fun, all those things, trying to entertain, but also trying to win. It’s a very fine line and it’s a line I’ve always struggled with over my career.

‘I’ve always wanted to play exciting shots, play to the crowd because I enjoy that but it doesn’t work every week. There’s definitely an argument that if I’d been slightly more considered over my career I might have won some of those tournaments that I’ve lost. The flipside is, I’ve won all the Triple Crown titles I’ve won by playing my natural game, so it’s a tricky balance.’

It’s not relevant at the non-ranking Masters, but Murphy has some work to do in ranking events over the rest of the season, as he is set to tumble out of the world’s top 16 if he doesn’t pick up a few more wins by the end of the season.

It’s been a quiet time since Murphy made the World Championship final in 2021, with just one ranking semi-final since then, and he admits he doesn’t really feel like a top 16 player right now.

‘I was actually just joking with a friend about how I’m still in the top 16, I don’t know how I am!’ Murphy said.

‘While my game is trending in the right direction, I don’t currently feel like one of the best 16 players in the world. The one-year list and the end of season rankings show that as well.

‘It’s up to me to put the results on the board. There’s no point worrying about it. To use John Virgo’s phrase, I’ve got to try and pot as many balls as I can and see where it takes me come the end of the season. But I do feel like something’s just round the corner and if I am in a battle for my 16 spot at the end of the season I’ll be giving it my all to keep hold of it.’

The Masters kicks off on Sunday afternoon with Murphy taking on defending champion Robertson, which will be nearly 23 years since they first met as professionals in 1998.

Much has changed since then, with both becoming world champions, and Murphy believes the Australian has probably turned into the best all-round player of all-time.

‘When he first joined the tour he was very raw, had no defensive game at all, and I’m sure he would admit that himself,’ said Murphy of Robertson. ‘He could pot anything he looked at, and still can, he’s one of the most devastating players we’ve ever seen.

‘But what he has done over the years is mould himself into a complete all-rounder. They used to say John Higgins is the best all-rounder but I think it’s probably Neil Robertson these days. Able to play any facet of the game, mix it with anybody at anything.;

Murphy not only has the ultimate respect for Robertson as a player but also as a man, although not so much his navigational skills, after the Aussie famously drove to the wrong Barnsley for a match.

‘It would be a rivalry in the nicest of terms. We get on. I have an incredible respect for Neil and his achievements,’ said Shaun. ‘Coming from Australia, to do it in the way he’s done it with such panache and style.

‘He’s never got into trouble off the table, he’s a great ambassador, his geography is worse than my little boy’s but we can let him off that. An impeccable professional and great role model and wonderful player, great to watch.’

The Magician downed the Thunder from Down Under in the 2015 Masters final, which was one of the most remarkable ever as the Englishman walloped the Aussie 10-2, a scoreline that would have been extremely long odds.

Murphy remembers two tales from that day, firstly as he gained even more respect for Robertson and how his mother forced made a memorable debut at a pro tournament.

‘When I beat him in that 2015 final, I was trying to complete the Triple Crown set, I remember very fondly Neil’s words at the end, he shook my hand and said, “welcome to the club.” To be so gracious after losing is something I’ll always remember,’ said Shaun.

‘Incidentally that was the first time my mum had come to any snooker since I was a junior player. She stayed for the whole thing and we were at the after-party and I ended up on a piano. My mum wouldn’t leave it alone, she came up shouting at me to ‘play some bloody Abba!’ I was asking why and she was insistent it was for Neil’s partner, that she’d love it. The problems were firstly, I didn’t know any Abba, and secondly, Mille is from Norway not Sweden!’

The multi-talented Magician may or may not get to tickle the ivories this time around, but he will be on punditry and commentary duty for the BBC as well as playing.

Something of a natural in the role, but Murphy has managed to rile some people up with his scheduling at events, causing a stir at the Crucible when he commentated and played on the same day, but he does not intend to stop doing that if he feels like he wants to.

‘People get annoyed about that don’t they?’ Shaun said. ‘Of course I do understand where they’re coming from, but without sounding big-headed, as the professional I’ll have to pull rank and declare that I’d never do anything that I’d consider detrimental to my own game.

‘I got a lot of criticism at the World Championship but I was commentating in the morning and playing at night, these things aren’t linked. If I wasn’t commentating I’d be watching in my hotel room.

‘People have to realise that I’d never do anything that jeopardised my own performance or put me at a disadvantage. I have been criticised for that decision, but it’s a decision I’m happy with.’

Murphy and Robertson meet at 1pm on Sunday at Alexandra Palace.


MORE : ‘I don’t want to be that idiot walking out of matches’ – Dave Gilbert returns to the Masters after a bad year