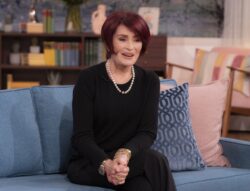 Sharon Osbourne has weighed in on cancelled culture and claimed she is proof of ‘blacklisting in America’.

The TalkTV presenter, who was enjoyed a boozy night out with her co-stars in London over the weekend, has once again addressed her exit from The Talk in the US in March 2021 after an uncomfortable discussion with her co-host Sheryl Underwood live on-air.

During the episode, Sharon, 70, defended her friend Piers Morgan after he was forced to deny that his relentless criticism of Meghan Markle was racially-charged.

Sharon asked Sheryl to ‘educate’ her on how Piers’ remarks about the Duchess of Sussex could be viewed as racist, with many viewers suggesting Sharon’s line of questioning Sheryl on live TV was inappropriate.

Reflecting on the situation on Monday’s episode of This Morning, she said: ‘It went very, very wrong. They say that there’s no blacklisting in America – I’m living proof that there is. Not that I’m resentful or whatever, it’s just a fact of life it happens.’

Sharon didn’t immediately answer when host Phillip Schofield asked if she felt like she’d been ‘cancelled’.

Sharon Osbourne has opened up on being ‘blacklisted’ (Picture: Ken McKay/ITV/Shutterstock)

She insisted she has ‘never spoken with hate’, noting while she can be ‘confrontational’ she doesn’t feel like she has crossed a line.

‘The thing is, I can look at myself in the mirror,’ she said. ‘I’ve never spoken with hate, I say what I feel, I’m confrontational. But I don’t do any hate speech and I know who I am, and I stick up for my friends. That’s what I was doing.’

Asked if she has to watch what she says on TalkTV in the UK, she added: ‘At TalkTV I don’t have to, because everyone’s got these opinions… We all say what we feel in a respectful way, no hate speech.’

Ozzy and Sharon have had cameras rolling for their UK return (Picture: Axelle/Bauer-Griffin/FilmMagic)

Meanwhile, Sharon has been busy filming her and husband Ozzy Osbourne’s return to the UK from Los Angeles for an upcoming reality show, and she admitted having the cameras rolling again has been ‘fun’.

Explaining the decision to move back, she said: ‘Age. Life changes, doesn’t it? Everything changes so quickly. It was just, “What are we doing here?” We never really belonged there.

‘Even though Americans were great to us, they embraced us as a family… They embraced my kids, that was so great. But I’ve always been very English.’

Sharon admitted convincing Ozzy was difficult because ‘it’s been so long since he’s spent a long time here’, while their children Jack and Kelly weren’t best pleased.

Elsewhere in her This Morning interview, Sharon addressed the latest bombshell chat from Prince Harry, and suggested that in her opinion he might not be as ‘happy’ as he seems.

She said: ‘It’s just terribly, terribly sad. When you see somebody say, “I’m the happiest you’ve ever been in your life”, and you go, no you’re not. You’re fibbing.

‘I think that the more that Harry gets pushed into going into talking about things that maybe he’s not been prepared for, you’ll see this little rage coming out of him. “I’m so happy, this is the place for me”. Listen, i don;t know him. I just know I’m not convinced.’

This Morning airs weekdays at 10am on ITV1.


MORE : Sharon Osbourne enjoys boozy night out with The Talk co-stars in London after ‘medical emergency’

The Talk star opens up on her controversial exit.