Shania Twain proud to do nude photoshoot while going through the menopause at 57: ‘I’m so unashamed of my new body’ 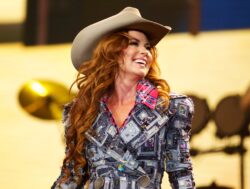 Singer Shania Twain is seriously impressing us with her empowering words on body image and menopause.

The iconic country singer is set to release her sixth album, Queen Of Me, in February, more than five years after her last record, and is proud to show fans she’s as proud of her body as ever – but it was a journey to get there.

The 57-year-old was open about how removing her top for the Waking Up Dreaming single cover helped her overcome long-standing body image concerns.

The You’re Still The One singer posed for the cover image while wearing a cowboy hat and a pair of vibrant pointy-toe boots, concealing her bare chest with her arms.

‘This is me expressing my truth. I’m comfortable in my own skin, and this is the way I am sharing that confidence,’ the singer said, explaining that the photos were a mark of how far she had come.

This confidence is shown in much of the upcoming album’s pictorial promotional material.

The country icon feels better than ever (Picture: Emma McIntyre/AMA2019/Getty Images for dcp)

‘I think the best fashion is confidence, and whatever you wear — if you’re wearing it with that, it’s fashionable.’

‘I am a woman in my late 50s, and I don’t need to hide behind the clothes,’ she added to People.

The whole experience, she explained, was completely empowering: ‘I can’t even tell you how good it felt to do nude shooting.’

‘I was just so unashamed of my new body, you know, as a woman that is well into my menopause. I’m not even emotional about it; I just feel okay about it. It’s really liberating.’

It isn’t new territory for Shania though, as she recalled her choice to not wear a bra in the 1993 music video for What Made You Say That, adding: ‘From the very beginning – the very first video – I was dumping the bra.’

‘But, I was a lot firmer then, so as I grew older, I started feeling a different pressure of, ‘Well, your breasts are not as plump as they used to be.

‘Your skin is not as tight as it used to be. Maybe you should start covering it up a little bit more,’’ she continued.

The newest photos reflect the overall theme of the star’s new music which is, Shania, says, taking back her power and ‘being the boss of myself.’

‘Queen of Me is all about being the boss of myself. And taking responsibility for what I put out there, what I project. And my truth, as I get older, which I wish I had this truth when I was younger, is just to feel more – less apologetic for how I am, how I look, less affected by other people’s criticism.’


MORE : Made In Chelsea’s Ollie Locke and husband Gareth reveal surrogate has suffered miscarriage: ‘This is our third time’