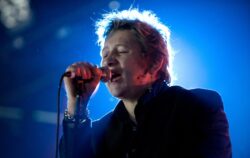 Shane MacGowan has thanked fans for their support in a new video, as he’s returned home just in time for his birthday after being hospitalised for a ‘dangerous’ infection.

The Pogues singer’s wife Victoria Mary Clarke asked for ‘prayers’ and ‘healing vibes’ earlier this month after he was rushed to hospital.

She has since revealed that MacGowan, who celebrates his 65th birthday tomorrow on Christmas Day, has contracted viral encephalitis, a rare condition which causes the brain to become swollen.

He then caught shingles and the infection spread to his eye leaving doctors concerned and wanting to keep him in for at least two weeks.

Posting a video on social media, MacGowan waved to the camera and wished his followers a Happy Christmas.

He added in the caption: ‘Happy Christmas everyone and thank you for all your messages and prayers.’

Happy Christmas everyone and thank you for all your messages and prayers ðð ðð pic.twitter.com/aPYUhOBmLl

Earlier this month, recalling when he fell ill, Victoria, 56, said: ‘I noticed it on his face. His eye was getting red and began to close over. I called the doctor and the doctor said it was very dangerous so we had to get him to the hospital straight away.’

She added: ‘The hospital explained to me that shingles can go into your brain and that’s what happened to Shane so now they want to keep him in on a drip for two weeks.’

The Pogues singer was fighting a serious infection in hospital (Picture: @shanemacgowan, Instagram)

His wife Victoria hoped to have him home for Christmas (Picture: Phillip Massey/FilmMagic)

However, MacGowan has shown signs of progress and, according to journalist Victoria, ‘seems perfectly normal now’ but ‘p****d he can’t drink in the hospital’.

Speaking to The Sunday Independent, Victoria also shared her amazement that the Fairytale of New York singer has managed to defy doctors’ odds, with two warning the star that he could die ‘within six months’ if he didn’t change his lifestyle.

Explaining what keeps her husband going, she said: ‘It’s probably a combination of his very determined mindset, a strong will and a strong spirit. And also I can’t say that it’s nothing to do with his religion because it could well be because he prays so much.

‘So I think he is probably bringing himself a lot of good energy by doing that.’


MORE : Doctors ‘confident Shane MacGowan will be ok’ after The Pogues singer is admitted to hospital