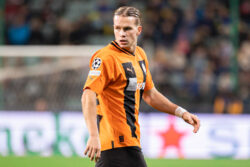 Mudryk has not hidden his desire to join Arsenal (Picture: Getty)

The Gunners are in talks with the Ukrainian side over a January move for the winger having tabled a bid of £55million this week.

As expected, however, Shakhtar have rejected that offer and are hoping to get as much as £85million for the 21-year-old next month, according to The Daily Telegraph.

Mudryk is eager to join Mikel Arteta’s side but so far Arsenal’s offer falls way short of Shakhtar’s valuation – but there is belief a deal will still be agreed. Mudryk has not hidden his desire to join Arsenal, talking up a move to the Emirates on a number of occasions this season.

The winger also got Arsenal fans excited after sharing footage of him watching his potential new club’s Boxing Day win over West Ham.

Mikel Arteta was quizzed on the social media activity post-match but was adamant that the Shakhtar star’s actions should not be taken as clue as to his potential destination in January.

He said: ‘The good thing is that in England you don’t have many other matches in other countries. We are the only ones playing through Christmas so hopefully a lot people have watched our game and we give them a good show.’

Asked for a response to speculation that Arsenal have launched an opening offer, Arteta added: ‘You know I never speak about players that are not with us and I know in this transfer market you have to ask me the question.

‘I spoke with my agent and I know that in the summer there were several offers for me from clubs in the top European championships, but the club decided not to let me go. I took it as absolutely normal, because I fully trust Shakhtar’s management,’ Mudryk said.

He continued: ‘The amount of €100m puts a barrier for my transition to the top championship, which I so dreamed of. I can’t say that my dream was killed, but wounded, that’s for sure.

‘But I’m a professional, I’m a Shakhtar player, we have a few difficult games left in the championship, in which we must win, and I’ll do my best for that.’

The Gunners made an offer of £55million.