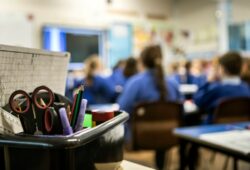 The NEU members will vote on industrial action this week (Picture: PA)

Strikes will close most state schools in England and Wales for several days over the next two months if teachers vote this week for industrial action.

The National Education Union (NEU) has rejected a five per cent pay offer and is expected to reveal the result of its strike ballot on January 16.

It is understood the NEU is planning several days of action from the start of February to the middle of March.

Two other teaching unions are balloting this week but NEU general secretary Kevin Courtney said the result was likely to be close.

‘I think we are going to pass the threshold but there is a chance we won’t,’ he told The Observer.

If the vote passes, Mr Courtney said: ‘We will call on members in all schools in England and Wales to strike – many would have to close.’ The union was aware it must try not to alienate parents and most would understand the teachers’ actions, he added.

London woman loses out on flat after she’s outbid by renter who pays £48,000 upfront

He said: ‘I think parents are starting to pick up the day-to-day situation in schools – that their child’s maths teacher might never have acquired a maths qualification, that there is such a rapid turnover of teachers all the time, that there is a lot of disruption.’

The NEU is demanding a 12 per cent pay rise, claiming its 450,000 members have lost a quarter of their pay to inflation since 2010.

Education secretary Gillian Keegan said she hoped the government’s proposed anti-strike legislation would not be applied to schools. She told The Sunday Times: ‘We are definitely not trying to be antagonistic.’

Meanwhile, teachers in Scotland are due to go out on strike later this week.

Teachers will vote over industrial action over pay this week.