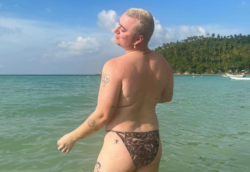 The singer was having a fabulously festive time (Picture: Instagram/samsmith)

Sam Smith enjoyed Christmas in sunnier climes, sharing a picture of themself frolicking in the sea in leopard-print bikini bottoms.

The chart-topping singer posted the snap while wishing fans a happy Christmas, which showed Sam basking in the sunshine while standing thigh-high in the ocean with their back to the camera and face held up slightly to catch some warmth.

Sam, who came out as non-binary in 2019 and explained that they were changing their pronouns to they/them after ‘a lifetime of being at war with my gender’, was clearly enjoying the festive season away from the cold of the UK.

‘Merry Christmas Sailors ⚓️ sending you healing and love today ✨,’ they wrote in the accompanying caption.

The Unholy hitmaker also posted a video of them strutting down the beach with a pal – also clad in bikini bottoms – as they swung their hips and ran their hands through their hair.

Sam, who recently performed at the White House as President Joe Biden signed into law the historic equal marriage bill, took to Instagram just a few weeks ago to share a picture of themselves on a motorbike in only underwear, trainers and a flowing fur coat after saying they had finally ‘learned to be confident’ in their skin.

The Stay With Me singer told British GQ: ‘Over the last few years, as I’ve become confident in my skin, I’ve got loads of wonderful romantic attention.

‘It’s been incredible. I’m so open to it. And I know what I want, and I know who I am and I’m excited for that.’

In a backstage interview at Capital’s Jingle Bell Ball with Barclaycard with Roman Kemp, Sam also gave an update on their tattoos – which now number around 35 – as they admitted they felt they might be ‘addicted’.

Chatting about some of their new additions, Sam revealed: ‘I’ve been going onto the torso… It was intense, but it was good. We were listening to loads of pop music and it was fun and we had a good time.’

‘I was just eating Cheetos, just getting into the mood,’ Sam said of a recent inking session.

After Roman asked what they had tattooed on their body now, Sam replied: ‘It says “romance” on my belly. And then my anchor on my chest. I’m addicted now. I’m like 35-plus tattoos.’

Sam has previously been open about their tattoos, with some thought to have particularly important meaning while others… really don’t.

The singer jetted off for some winter sun.