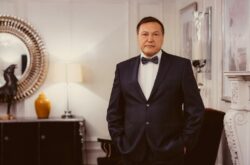 Pavel Antov died while on a trip in India to celebrate his 66th birthday (Picture: East2WestNews)

A Russian politician who previously dubbed the war in Ukraine ‘terror’ has mysteriously died.

Pavel Antov was on a trip in India to celebrate his upcoming 66th birthday when he was found on Saturday.

The Russian Consul General has said he ‘fell’ out of a hotel window in Rayagada, Odisha state.

His Indian guide rushed him to hospital but he was later declared dead by a doctor.

A friend of the wealthy regional MP, 61-year-old Vladimir Budanov, had died ‘from a heart attack’ just two days before.

This has prompted the Indian authorities to investigate whether Mr Antov jumped after ‘becoming depressed over the loss’.

Mr Antov leaves behind his wife and his daughter (Picture: East2West News)

He had also spoken out against the war in Ukraine in June after Moscow unleased air strikes on Kyiv.

Discussing a Russian missile strike, Mr Antov said: ‘A girl has been pulled out from under the rubble, the girl’s father appears to have died.

‘The mother is trying to be pulled out with a crane – she is trapped under a slab. To tell the truth, it is extremely difficult to call this anything other than terror.’

But he quickly withdrew the comment and issued an apology, insisting he had ‘always supported the president’ and ‘sincerely’ backed the goals of Putin’s military operation.

Mr Antov, who leaves behind a wife and daughter, is Russia’s wealthiest lawmaker. In 2019 his declared annual earnings were listed as £130 million in an analysis by Forbes Russia.

Russian authorities say he ‘fell’ from a his hotel room window.