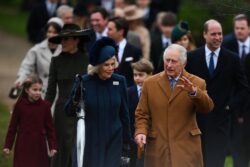 The King and his loved ones are celebrating their first Christmas without their beloved Queen.

They will gather at Sandringham, in Norfolk, which has not seen the traditional festivities since 2019 because of Covid restrictions.

Members of the Royal Family attended a morning service at St Mary Magdalene Church together.

They were pictured arriving as a group, with King Charles and Queen Consort Camilla in front.

Joining them were the Prince and Princess of Wales and their children – Prince George, nine, Princess Charlotte, seven, and four-year-old Prince Louis, who walked hand in hand with Kate.

Also in the walking group, who passed a crowd of well-wishers on the way to the church, was the disgraced Duke of York.

There had been some speculation about whether Andrew, whose reputation was left in tatters by a civil sex abuse case he settled out of court while denying wrongdoing, would make a public appearance but he was seen entering the church with his relatives this morning.

The Earl and Countess of Wessex were also in the group, but the Duke and Duchess of Sussex, who live in California, were absent.

Charles has recorded his first Christmas broadcast as monarch, which is likely to reflect on the loss of his mother, and her legacy.

The festive message was recorded on December 13 at St George’s Chapel, Windsor Castle.

Traditionally, members of the royal family sit down to watch the televised address when it airs after lunch, usually at 3pm.

Sandringham House has been the private home of four generations of British monarchs for more than 160 years, and now belongs to the King.

However, although the royals are returning to Sandringham this year, royal expert Jennie Bond told OK! that without the Queen holding the family together, the younger royals may want to do their ‘own thing’.

She said: ‘The younger royals will probably want to spend time with their own families, so I think the two or three day celebrations of the past may, indeed, be a thing of the past.

‘While I imagine there will be a gathering at Sandringham, whether it will be quite as extended as it used to be with the Queen, and with quite as many people, I’m not sure.’

She added: ‘Without the linchpin of the Queen holding together an often fractured family, they may suddenly decide to do their own thing.

‘It’ll be the first time since all the turmoil following her death that the royals will stop for a moment and, as a family, reflect and raise a glass to her.

Another change to the Sandringham tradition is that this year, Queen Consort Camilla is expected to invite her own children.

A source told The Sun: ‘Camilla is keen that her family are at the heart of Christmas, particularly as Charles won’t have his youngest son there.’

The late Queen had spent the festive period at Windsor Castle for two years in a row, in 2020 and 2021, due to the Covid-19 pandemic, before her death in September this year.

Traditionally, royal Christmases at Sandringham feature a turkey lunch at the house.

The last time the Royal Family gathered together at Sandringham for Christmas was in 2019 because of Covid restrictions.