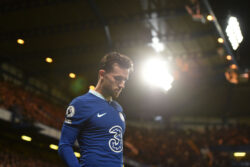 Ben Chilwell will be annoyed after his mistake cost him vs Man Utd (Photo: Getty)

Roy Keane has singled out Ben Chilwell for blame after Chelsea conceded a late equaliser to Manchester United on Saturday.

After Jorginho’s penalty in the 87th minute, it looked as if Chelsea were going to get all three points in what was a mostly dull affair at Stamford Bridge.

But after Casemiro’s header crept over the line in injury time, they were forced to settle for a 1-1 draw, and Keane was left less-than impressed with the Blues’ defending, name-checking both Chilwell and Thiago Silva.

‘Chelsea were all over the place considering you’re looking at an experienced centre-half [Silva],’ the former United captain told Sky Sports.

‘They’re not quite set there and of course United are gambling throwing people forward it’s a great ball in.

‘Chilwell, your typical full-back or wing-back, he’s just jumping for the sake of it. I don’t like that. He’s going through the motions. It’s an amazing header.

WHAT A HEADER FROM CASEMIRO ð¤¯

‘When the ball comes in there’s situations like that in the game who wants to really head the ball. Chilwell did not want to head the ball, he went through the motions like a modern full-back.

‘It’s just laziness, no desire and it’s an amazing header.’

The result leaves Chelsea fourth, just one point above United in the table after 11 games.

United’s defending also came under scrutiny, with Gary Neville describing Scott McTominay’s foul on Armando Broja for the penalty as ‘terrible’ and ‘clumsy’.