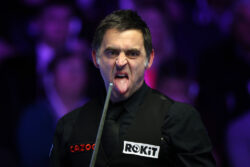 Ronnie O’Sullivan strolled into the quarter-finals of the Masters (Picture: Getty Images)

Ronnie O’Sullivan sounded in buoyant mood after beating Luca Brecel 6-1 in the first round of the Masters, telling his rivals: ‘The players can expect me to keep coming for more!’

The world champion and world number one looked in very good form as he knocked in two centuries and two more half-centuries in a pretty comfortable afternoon against the Belgian Bullet.

Next up for the 47-year-old will be Mark Williams or Dave Gilbert and it looks like a very focussed O’Sullivan either man will be facing at Alexandra Palace.

The Rocket often suggests he is not fussed whether he wins or loses on the snooker table, but he changed that tune after beating Brecel, saying he is just trying to minimise disappointment.

‘I might say I don’t care, but actually there’s a competitor in there,’ O’Sullivan said. ‘When I say I don’t care, I mean I’ve got life in perspective. Snooker’s not the be all and end al, I love it, enjoy it, love competing, but I also enjoy my life as well.

‘I don’t want to be defined by snooker or disappointed if I don’t do well at snooker. I’ve enjoyed my last 10-12 years of snooker more than I ever have, I wish I’d done it years ago.’

Speaking to the BBC after the contest, O’Sullivan explained: ‘ thought I had to clarify that. I get quite a lot of stick because everyone says I don’t care but I feel as though I’ve got life in perspective.

‘I’m still competitive If I took up anything I’d want to be better, that’s just natural, you’ll never lose that.

‘So the players can expect me to keep coming for more, I ain’t going away just yet.’

Asked how he is still producing such quality at 47 years old, O’Sullivan says it is all about finding a balance, not over-practicing and knowing when he needs to push himself or take time away from the table.

‘I enjoy it, I’m not a slave to it. I think I work harder off the table than on it, so when I’m on the table I feel refreshed,’ he said.

O’Sullivan made a top break of 134 in the dominant win (Picture: Getty Images)

‘I do enough. I know how much I need to do to get in shape, so I’m not burning myself out.

‘Since winning the World Championship I wasn’t enjoying the game, I just needed to get through the first few months of the season, didn’t do much practice, but I knew why.

‘It was just a comedown from winning a mammoth tournament. I didn’t practice since I got beat by Ding [Junhui] at the UK Championship] and I knew that was the right thing to do. I’ve had a week’s practice and I feel okay.’

O’Sullivan takes on Williams or Gilbert on Thursday afternoon.


MORE : Neil Robertson and Mark Selby react to shock first round defeats at the Masters

‘I ain’t going away just yet.’