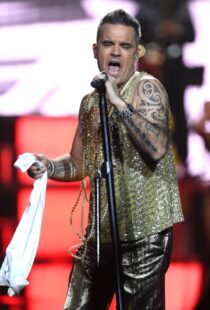 Robbie Williams might be in the wrong profession after dazzling audience members with a deep throw into the audience – only to end up accidentally hitting a fan with the T-shirt.

The former Take That singer is currently performing around the UK on tour to celebrate his number one album XXV, and brought his latest show to the OVO Hydro in Glasgow, Scotland on Monday evening.

At one point, Robbie quite literally wanted to give back to fans by chucking T-shirts into the packed-out audience but it seems he overestimated the power of his throw.

A fan shared footage of the generous giveaway on TikTok, with Robbie, 48, seen far in the distance on-stage half-singing Candy while throwing the shirts into the audience.

‘POV: you stand in the worst possible spot when Robbie Williams is throwing out T-shirts,’ they captioned the video.

Robbie then aims in the direction of the fan filming the clip, with the T-shirt seen flying high into the air and miraculously landing right on the concert-goer, whose camera is toppled by the object.

Robbie, here at London’s O2 Arena recently, has had quite an eventful tour so far (Picture: Rex Features)

The singer, here in September, clearly didn’t realise the power of his throw (Picture: PA)

Their followers were surprised by Robbie’s athleticism, with one writing: ‘That’s actually mad impressive i can’t lie.’

‘Actual been howlin at this for a solid 5 minutes omg,’ another commented, to which the fan replied: ‘Like what are the actual chances,’ alongside a cry-laughing emoji.

Another follower quipped: ‘Does he fancy a game in the NFL next weekend, asking for the Colts.’

Robbie will perform another night in Glasgow (Picture: PA)

One joked in similar fashion: ‘My man Robbie out here like Tom Brady,’ prompting the fan to reply: ‘That’s the retirement plan sorted when he hangs up the mic.’

After all that, the concert-goer revealed they went home empty-handed, writing: ‘No 😭 I was still processing what had just happened and someone behind me got it.’

Someone who watched the incident unfold chimed in: ‘Nah I was stood right beside you, & ended up watching the 3 women fight on the floor for it instead of oor Rob.’

It’s been an eventful tour so far with Robbie previously having to stop one show after an excited fan flashed her breasts.

Robbie is preparing for two particularly major shows next month as he’ll perform two nights at London’s Royal Albert Hall, with the gigs filmed for the upcoming Better Man biopic about his life and career.

The XXV tour will return to the OVO Hydro tonight for a second night.

He’s got some arms on him, our Robbie.