Rishi Sunak: It’s our mandate… and I’m not daunted by challenge 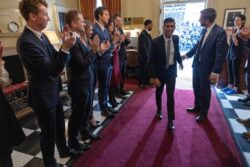 Seven weeks after his late mother appointed her 15th and final PM, the new king welcomed his second in Buckingham Palace’s lavish 1844 Room. The first British Asian PM was greeted with sweets for Diwali during a 37-minute meeting. At 10 Downing Street soon after, Mr Sunak admitted the country faced a ‘profound economic crisis’ with ‘difficult decisions to come’.

He blamed ‘the aftermath of Covid and Putin’s war in Ukraine’ – but also Ms Truss’s 49-day reign. Her unfunded tax-cutting mini-Budget spooked markets, adding to the cost of borrowing for millions, and the government, amid the cost of living and energy crisis.

Standing at a different lectern to the one Ms Truss used for her leaving address an hour earlier, he paid tribute to her ‘noble aim’ of improving growth.

But he insisted: ‘Some mistakes were made – not born of ill will or bad intentions, quite the opposite in fact, but mistakes nonetheless and I have been elected as leader of my party and your prime minister in part to fix them.’

Rejecting Labour calls for an election, the third PM in three months insisted the mandate from the 80-seat Conservative majority won under Boris Johnson in 2019 was ‘not the sole property of any one individual’.

Inside Downing Street he was applauded by his new staff – and began a purge of Ms Truss’s cabinet.

Ms Truss’s deputy PM and health secretary Therese Coffey has been demoted to her past role at environment. But Suella Braverman – who quit as home secretary last week, triggering Ms Truss’s chaotic exit – was brought back. Dominic Raab also returned to his roles as Mr Johnson’s deputy PM and justice secretary.

Penny Mordaunt, who quit Monday’s race to be party leader, kept her  job as Commons leader despite reports she wanted to become foreign secretary.

Instead, Mr Johnson’s supporter James Cleverly kept his job, while Nadhim Zahawi – who also backed ‘Boris 2.0’ in the contest – became minister without portfolio.

Crucially Jeremy Hunt – who replaced Kwasi Kwarteng as chancellor two weeks ago in the crisis – kept the role.

During the day the pound rose 1.77 per cent against the dollar to 1.148, and was 0.79 per cent up against the Euro at 1.151. Government borrowing costs also fell as long-term gilt yields eased.

Who’s who in the new cabinet

Mr Sunak had told MPs they must ‘unite or die’ in a private meeting soon after he was announced as the only candidate left in the race on Monday.

Last night a No.10 source said the reshuffle ‘brings the talents of the party together’. They added: ‘It reflects a unified party and a cabinet with significant experience, ensuring that at this uncertain time there is continuity at the heart of government. The hard work begins now.’ Mr Sunak’s near-six minute speech was longer than any by a new PM in recent times except Mr Johnson’s 11-minute epic in 2019.

Boris Johnson took almost 24 hours to congratulate Rishi Sunak – urging Conservatives to give him ‘their full and wholehearted support’.

The former PM, who paved the way for Mr Sunak’s success after dropping out of the leadership race, sent his best wishes a day later than outgoing PM Liz Truss and failed candidate Penny Mordaunt.

The former chancellor praised his old boss’s ‘incredible achievements, warmth and generosity of spirit’. But in an apparent dig at Mr Johnson – still facing a Commons inquiry into claims he lied to MPs – he vowed: ‘This government will have integrity, professionalism and accountability at every level.’

He added: ‘I fully appreciate how hard things are and understand I have work to do to restore trust after all that’s happened. All I can say is I am not daunted.

‘Together we can achieve incredible things. We will create a future worthy of the sacrifices so many have made and fill tomorrow and every day thereafter with hope.’