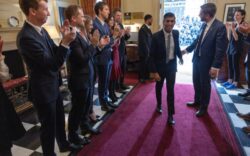 Rishi Sunak has appointed his cabinet on his first day as the UK’s prime minister.

The cabinet reshuffle saw some predictable choices as well as a few surprises.

The return of Suella Braverman as home secretary – she resigned under Liz Truss for a security breach.

She endorsed Sunak – which was seen as a massive boost for his campaign – as the represented the right-wing of the party.

The PM bought back some key roles – like Dominic Raab, Steve Barclay and Oliver Dowden.

Simon Hart has also been brought in as chief whip – a key role after months of internal infighting.

Nadhim Zahawi was demoted from Cabinet Office minister to chair of the party.

But some Liz Truss and Boris Johnson loyalists are out. Jake Berry, Levelling Up Secretary Simon Clarke – a Truss backer.

Boris Johnson fan Jacob Rees-Mogg is out as business secretary – he was openly critical of Rishi Sunak.