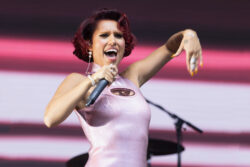 2023 could be a chart-topping year for the singer-songwriter already (Picture: Jo Hale/Redferns,)

Singer Raye is on track for her first-ever UK number one single, as her hit track Escapism. has soared up the charts and into the spotlight in the post-Christmas shake-up.

Following Wham’s enduring hit Last Christmas clinching the final number one of 2022, and a whopping drop of 84 places in just one week for LadBaby and their fifth festive number one, it’s Raye that looks to be sitting pretty.

The newly-independent artist saw her streaming hit rise twelve places at the midweek point, putting her in prime position to nab the top spot for the first time in her career.

Singer-songwriter Raye first appeared on the charts back in 2016 on Jonas Blue’s By Your Side, which reached number three, and has notched up a string of 10 top 40 hits, four of which landed in the top 10.

The 25-year-old publicly cut ties with her major record label in July 2021 after clashing over creative differences.

Raye left her record label in 2021 to go independent after a creative dispute (Picture: Joseph Okpako/WireImage)

She had claimed that management had stopped her from releasing her first album for over seven years – but now it looks as though going independent could prove a chart-topping move.

Speaking exclusively to OfficialCharts.com, Raye gushed: ‘It would be beyond a dream to be number one. With this song? At this time in my life? Don’t!’

Her three other top 10 hits include You Don’t Know Me with Jax Jones (3), Secrets with Regard (6) and Bed with Joel Corry & David Guetta (3).

Last year she also celebrated her ‘sonic freedom’ while speaking with Metro.co.uk, explaining: There’s no rules and there should be no rules when it comes to music so it’s been lovely choosing how to execute this.

Her debut album, years in the making, drops next month (Picture: Burak Cingi/Redferns)

‘Due to my past restrictions musically I, over the years, attempted to start making this album many times.’

Her long-awaited debut album My 21st Century Blues will finally drop in February.

Have you listened to Raye’s track Escapism.?Comment Now

Also on course to reach new peaks this week are Central Cee with Let Go (3), Rema’s Calm Down (4), and Bugzy Malone & TeeDee with Out of Nowhere (5).

At the lower end of the top 40, there could be a new re-entry for Whitney Houston’s classic 1987 number one I Wanna Dance With Somebody too, which is gaining new ground at 36, thanks to the release of the biopic of the same name starring Naomi Ackie as Houston.

The Killers’ perennially popular Mr Brightside could also return to the top 40 for the first time in nine years, with the track currently at 37 – the record-breaking song has spent over six and a half years in total in the Official Singles Chart Top 100 thanks to its popularity on streaming services.


MORE : Iggy Pop claims he turned down the chance to be a member of AC/DC


MORE : Jennifer Lopez shares gorgeous unseen wedding photos with Ben Affleck and celebrates ‘one of the best years yet’

She has 10 top 40 songs to her name, but hasn’t reached the top spot just yet.