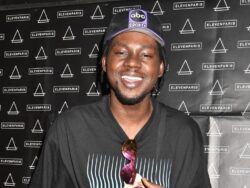 Theophilus London has been reported missing after not being seen for five months.

The 35-year-old rapper, who has worked with the likes of Kanye West, has been inactive on social media since July 11 and has not had any contact with his family since then.

His concerned relatives have since filed an official missing persons report with the Los Angeles Police Department and have appealed directly to London – who hails from Trinidad and Tobago – and to the public for any information that might lead to his safe return.

A statement shared by London’s representatives with several media outlets read: ‘Over the last few weeks, friends and family of Theophilus London have been working together to piece together his whereabouts. The last time someone spoke with him reportedly stretches back to July 2022 in Los Angeles.

‘On December 27, family members of Theophilus London travelled to Los Angeles to file a missing persons report with the LAPD. They are now seeking the public’s help with any information as to London’s whereabouts.’

London’s father Lary Moses London sent a message directly to his son, and said: ‘Theo, your Dad loves you, son. We miss you. And all your friends and relatives are searching for you.

London, 34, rose to prominence in 2011 and has worked with the likes of Kanye West (Picture: Getty Images)

‘Wherever you are send us some signal. No matter what we will come get you son.’

The reps added: ‘If you have any information regarding his whereabouts or well-being, please reach out to his cousin Mikhail Noel at his instagram account @iamdjkellz, or the LAPD.’

London rose to fame with the release of his EP, Lovers Holiday, in 2011 before dropping his debut album, Timez Are Weird, later that year.

His second album Vibes, which was executive produced by Kanye, arrived in 2014, and was followed by his third album Bebey in 2020. London also featured on the track JFK on Azealia Banks’ debut album, Broke With Expensive Taste, in 2014.

The 35-year-old musician has not been seen since July.