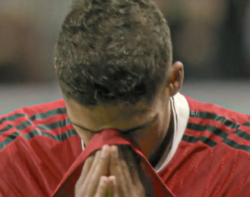 Raphael Varane looked in an emotional state after being forced off with an injury against Chelsea (Picture: Sky Sports)

Raphael Varane held back the tears after he appeared to suffer a serious injury during Manchester United’s Premier League clash against Chelsea on Saturday.

The experienced France international had been enjoying his best run of form since his move from Real Madrid the summer before last and appeared to have overcome the fitness problems that undermined his first 12 months in England.

Varane’s burgeoning partnership with Lisandro Martinez had underpinned United’s recent improvement under Erik ten Hag but he now looks set for a lengthy spell on the sidelines.

The 29-year-old had been imperious during the opening hour at Stamford Bridge but was forced off after rolling his ankle attempting to cut out a pass aimed at Pierre-Emerick Aubameyang.

Varane lay prostrate on the turf for several minutes before clambering to his feet and making his way gingerly to the sidelines.

The France international must be a doubt for the World Cup.