Rakie Ayola has perfect response if viewers complain new show The Pact is ‘too woke’: ‘Don’t use a word you cannot describe’ 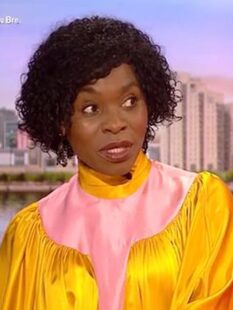 The star, 54, is set to star in the second series of The Pact, set to premiere tonight on BBC One centering on a Black family living in South Wales.

Speaking on BBC Breakfast, the Doctor Who and Noughts and Crosses star was asked by presenter Victoria Fritz how she would respond to critics who may say The Pact was portraying a ‘woke version’ of a Welsh family by centering a Black household.

And Ayola had the perfect response.

‘If anybody wants to say that to me, what I would say first is explain what you mean by ‘woke’ and then we can have the conversation. If you can’t explain it, don’t hand me that word,’ she said.

The actress urged people not to use a word they cannot describe, because they may know ‘know what [they] mean’.

‘Sit there and tell me what you mean by “woke” and then we can talk about whether this show is “woke” or not. Because then I will introduce you to a family just like this one.

‘So when you say they don’t exist when they clearly do, are you saying that they’re not allowed to exist? What do you mean by that?’

She concluded by encouraging viewers to have ‘a proper conversation’ about the show, and if you feel inclined to use the word ‘woke’ without understanding its meaning, ‘please be quiet because you’re incredibly boring’.

Ayola stars in series two of the BBC show, which centers on a Black family living in South Wales (Picture: Getty Images)

The clip has circulated online with many social media users praising Ayola for speaking out.

‘Rakie Ayola’s response to the ‘some people’ question was dignified & calm,’ one user said.

âIf you donât know, please be quiet because you are incredibly boringâ ð¯ Classy & patient response!

I will refer to this superb answer from @RakieAyola when next seeing vacuous nonsense on Social Media that authors usually do a runner from when challenged.

It was wonderful to watch – dignified, respectful STRONG and fair response. I’ve never seen the actor before, but I â¤ï¸ her now!

Sis hit um with a overhead smash on the volley. And we love to see it .

They continued: ‘We MUST challenge more people who use “Woke” to say what this means.

‘Self-described “anti-woke” people seem to be bigoted, racist, homophobes. I’m proud not to be “anti woke”. Does that make me woke?’

Another added: ‘This clip needs to be played to everybody who uses woke as an insult in the future, what a brilliant answer!’

‘That is an incredible reply and I am only sorry that you had to give it. It really feels like the country is getting worse,’ one other user posted.

The Pact series two begins on Monday, October 24, at 9pm on BBC One.


MORE : What does being woke mean and is it an insult? ‘Wokeism’ explained


MORE : How the word ‘woke’ was hijacked to silence people of colour

She did not hold back.