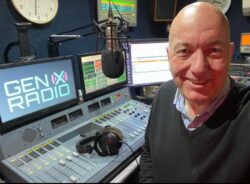 Tributes have been paid to Tim Gough, who died whilst presenting his show live on air (Picture: GenX / Radio Suffolk)

A radio DJ ‘died on air’ while presenting his breakfast show after he suffered a ‘suspected heart attack.’

Tim Gough, 55, was an hour into his programme when the music stopped halfway through a song.

Mr Gough, whose radio career dated back to 1986, had wished his listeners a good morning and was excited for the radio station to launch on DAB in a week.

He gave the weather across Suffolk before introducing ‘Grey Day’ by Madness, when the song stopped abruptly and the radio went silent.

Mr Gough, from Lackford in Ipswich, had been talking about famous couples who had married in Bury, Suffolk, over the years.

Time Gough had been a radio DJ since the 80s (Picture: GenX / Radio Suffolk)

According to the BBC, Mr Gough died from a suspected heart attack while he was recording the show at his home in Lackford, Suffolk from GenX Radio.

Mr Gough spent much of his life in Suffolk and began his broadcasting career at Ipswich’s Radio Orwell in 1986.

As well as radio, the Norwich City fan was passionate about travelling, socialising, photography, reading, music, film and TV, while he also enjoyed taking his Labrador Cooper on walks through the Suffolk countryside.

It is with the heaviest of hearts that I have to inform you, our dear friend and breakfast host Tim Gough passed away this morning whilst presenting his program.
Our love to his family, son, sister, brother and mum.
Tim was doing what he loved. He was 55 years old.
RIB buddy. x

Gen X paid tribute to the DJ and said: ‘It is with the heaviest of hearts that I have to inform you, our dear friend and breakfast host Tim Gough passed away this morning whilst presenting his program.

‘Our love to his family, son, sister, brother and mum.

‘Tim was doing what he loved. He was 55 years old.

James Hazell, managing director of GenX Radio, said: ‘To know Tim personally, as I did very closely for over 30 years, was to know a warm, caring, fun guy who myself and my family loved dearly. We are heartbroken by the news.

‘I know his family are enormously comforted by the hundreds of loving messages that have been received and have asked for privacy at this devastating time.’

He added Mr Gough had come out of retirement, going back on air for the first time in a decade, to present the station’s breakfast show.