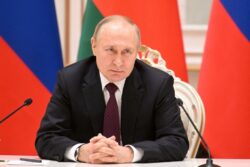 Speculation on Putin’s health has been ongoing for months now (Picture: Reuters)

Vladimir Putin was suffering from megalomania induced by cancer drugs when he made the decision to invade Ukraine in February, according to a new Western intelligence analysis.

A senior spy official from Denmark has claimed ‘delusions of grandeur’ and the Kremlin leader’s ‘moon-shaped face’ in early 2022 were signs of the side effects of hormone treatment for oncology.

The news comes after Kremlin officials were forced to admit that concerns over Putin’s health were now considered matters of ‘national security’ amid Covid mutations and emerging flu strains.

This may mean that the Russian leader retreats away even further from the public gaze in early 2023, fuelling more speculation about his ailing health.

An anonymous intelligence official only known as Joakim – said: ‘Delusions of grandeur are one of the known side effects of the type of hormone treatment that he was on.

‘It’s not something I can say for certain, but I think it did affect his decisions when he launched the war in Ukraine.’

The analysis suggested Putin was suffering from cancer and was undergoing hormone treatment for it when he started the war, but he is not thought to be terminally ill.

The ‘biggest uncertainty’ over the president was his health – ‘or someone removing him because of his failing health’, Joakim claimed.

Putin’s health has been labelled a matter of ‘national security’ by the Kremlin (Picture: Reuters)

Despite fervent speculation around his health, Joakim says he is unlikely to die from his condition, although there is a chance Russian power-brokers may seek to change horses to have a stronger figure at the helm.

‘It’s our firm impression that part of the elite do see they are heading down the wrong track,’ he said.

Despite this, he admits it is ‘likely’ that Putin remains in power for at least another five years.

The Russian leader’s gripping of desks is thought to be because he is ‘in serious chronic pain following several falls and accidents’, said Danish newspaper Berlingske, which interviewed the intelligence official.

‘This is chronic pain that he has suffered from for quite some time now,’ said the official. ‘That’s why he tends to sit and grab things tightly. It’s to ease the pain.’

The newspaper surmised that this could be from falling off a horse in the early 2000s, or judo or ice hockey injuries.

The Russian President is thought to be using concerns over Covid and flu as an excuse to step back from public appearances in the New Year (Picture: AP)

‘We don’t see anyone about to depose him. But if we did, the FSB would see it too, and that would probably get sorted very quickly,’ the official added.

Putin’s personal decision-making is seen as a key reason for Russian failures in the war in Ukraine.

‘We put a lot of the blame for this on Putin’s shoulders,’ said the senior intelligence official.

‘It wasn’t poor intelligence but Putin’s ideological convictions that led Russian soldiers to believe they would be greeted with flowers,’ reported the Danish newspaper.

‘It was because of Putin that everything was planned by a narrow circle of people and only shared through the ranks at the very last minute.

‘Because of this, the Russian forces simply did not know what they were supposed to be doing.’

Putin is reportedly still ‘interfering in the war too much’, recently taking part in a meeting with all his leading commanders and asking for their ideas.

‘That’s the worst idea in the world,’ the official said. ‘He has a general to lead this war. So he shouldn’t be sitting there getting input from all these other generals’.

Meanwhile, the Kremlin has paved the way for Putin to step back from public duties for health-related reasons, citing concerns over Covid and flu strains.

‘To be honest, it is unlikely that [communication with journalists] will be quite the same as it used to be before the pandemic in the foreseeable future,’ he said.

‘To expect things to return to what it used to be would be a mistake. I would say – no it won’t be [back to the same].’

‘But as these waves subside to their lowest points, then it would be possible to communicate in a freer mode.’

A Danish spy claims Putin’s ‘moon-face’ was the key to understanding his condition.