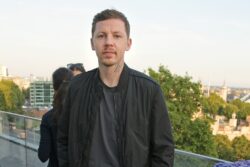 Professor Green revisited the moment he almost died after a seizure caused him to collapse.

The artist – real name Stephen Manderson – suffered dangerous injuries after he hit his head off concrete and steel following a seizure that had his body convulsing for eight minutes.

As part of a look back over the last year, the rapper posted a photo of his bruised and battered face.

In April, Stephen, 39, endured a grand mal which is a term used to describe losing consciousness and suffering violent muscle contractions.

Alongside the Instagram selfie, the star penned a heartfelt caption explaining his experience: ‘This also happened. (In April)

‘I had a grand mal seizure while home alone, fell face down into steel and concrete and convulsed for 8 minutes repeatedly hitting my head and face – I’ve never watched the cctv.

Professor Green snapped a selfie of his injuries after a seizure (Picture: Instagram)

The star penned a long caption explaining what he went through over the last year (Picture: Instagram)

‘The bruising internally was more the issue and I’ve been clawing my way back ever since.’

He continued sharing what caused him to collapse: ‘It was caused by a culmination of things, but largely I’d not been taking care of myself, the opposite in fact.

Underneath his candid post, many friends and fans uploaded well wishes and comments of support.

The rapper has had seizures in the past that led him to cancel a tour (Picture: Instagram)

Stephen was brought up in Hackney by his grandmother (Picture: BACKGRID)

Actor David Harewood wrote: ‘Jesus dude. May I say it was one of the highlights of my year meeting and talking with you.

‘I wish you the very best and hope we both continue to enlighten and educate on subjects considered taboo. Happy New Year dude.’

Stephen has been open about his struggles in life, admitting he had suffered seizures in the past that caused him to cancel a tour in 2019.

After fracturing vertebrae in his neck during a fall, he let fans know at the time: ‘I’ve had two further seizures and am lucky I didn’t break my neck.

‘Really f***ing lucky. Thanks for bearing with me.’

The Just Be Good to Green hitmaker was raised in Hackney by his grandmother after his father took his own life in 2018, following which young Stephen was called on to identify the body.


MORE : Professor Green shares emotional tribute to beloved dog as he dies: ‘You had such a gorgeous soul’


MORE : Professor Green wants son to work from young age to ‘understand value of penny’ as he fights against child hunger

‘I’ve been clawing my way back ever since.’