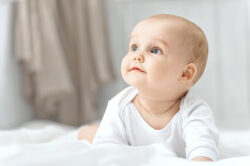 When it comes to trending baby names of the year, we’ve already seen the likes of Karen and Nigel fall out of favour, while Noah knocked Oliver off the top spot.

But it seems a professional baby-namer has cast her predictions for the next 12 months.

Steph Coffield is a stay-at-home mum who has a unique business idea: helping parents name their babies.

Now the 39-year-old expert, from St Paul, Minnesota, has predicted ‘dark and moody’ names – pegged to shows like Netflix’s Wednesday – will be a hit in the new year.

She also thinks that astronomy-based and celestial names, such as Luna and Aurora, will continue to rise in popularity.

She explains: ‘I think romantic names like Argo, Draco, Knight, Raven and Zelda will be popular.

‘Even Wednesday, like the show. Mystical names are doing well already.’

Steph – who recently published the book ‘Names Don’t Have a Gender’ – adds that longer, more traditional names will be less popular, as people pick their shorter alternative – such as Libbie and Chris.

She added: ‘It’s a trend that’s already happening. Parents know they’ll be calling their kid that name anyway, so they don’t even bother with the full name.

‘Longer ones like Anastasia, Elizabeth and Nicholas will be less popular in general.

‘I’m always being told by clients that they don’t want anything too long.

‘But some will always be popular no matter what, like Benjamin, for example.’

In terms of letters, E and L will be popular starting letters for names in 2023, according to Steph, while more unusual starting letters such as U, V and Y may start to emerge as parents look to shift from the ‘norm’.

What names do you think will be popular in 2023?Comment Now

Get in touch by emailing WTX News

These are her predictions.