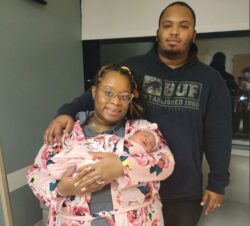 Erica (left) and Davon Thomas (right) gave birth to Devynn Briell Thomas on Christmas Eve at their home after being trapped due to blizzard conditions (Picture: CNN)

A woman who went into labor in the midst of the massive blizzard storm that pounded Buffalo delivered her baby at home with help from doulas on video chat.

Erica Thomas began having contractions two days before Christmas in her home in the northern New York city that went into a state of emergency during the storm.

Snow piled halfway up the Thomas’ door, making it impossible for them to leave and go to a hospital, her husband Davon Thomas told CNN. Davon called 911 and dispatchers said they would send an emergency vehicle, but later replayed that the responders could not reach their home.

Davon soon realized they would have to deliver the baby at home and called his friend, who posted on a Buffalo Facebook group that the couple was seeking help. A doula, Raymonda Reynolds, was among people who offered assistance and got on video chat with Davon to guide him through what to do.

‘Can i brag real quick my husband is the goat he really was on video chat with a nurse and doula and delivered our baby girl at home we are safe and alive thanks to him love u Davon Thomas,’ Erica posted on Facebook on Christmas Eve.

Davon wrote the same day: ‘When life puts you in certain situations you have two choices crumble or boss the f*** up.’

On Christmas Day, Erica shared a picture of their baby, named Devynn Brielle Thomas. She was born at 3.31pm on Christmas Eve.

Reynolds told CNN she could hear Erica in labor and kept telling her ‘to take deep breaths’.

‘I was trying to keep them calm and reassure them,’ she said.

Reynolds added her friend, nurse and fellow doula Iva Blackburn to the call and ‘she brought that extra comfort with the medical background’.

Around 3pm, the doulas advised Davon to use a flashlight to look at the baby.

‘The baby’s crowning!’ shouted Erica at that moment.

Davon put towels under Erica as she squatted and pushed and finally yelled, ‘She’s here!’

The doulas instructed the couple on cutting the umbilical cord and steps to take after the birth.

‘I couldn’t have done it without them,’ Davon said. ‘It was very comforting knowing they were there.’

The expecting parents could not go to a hospital as the storm dumped snow halfway up the door of their home. 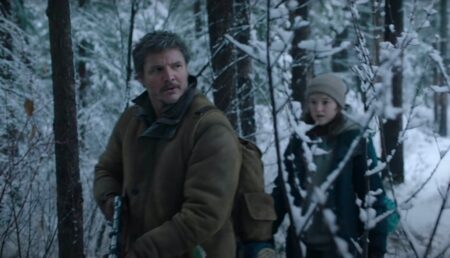