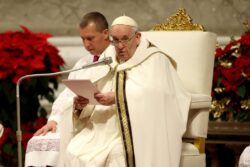 Pope Francis has condemned those ‘ravenous’ for wealth and power in a passionate Christmas plea to the world.

Speaking to 7,000 people gathered at the Vatican, he spoke out against war, poverty and economic inequality.

The Catholic leader has been an outspoken critic of rampant consumerism and politicians who allow people to suffer in pursuit of power throughout his almost 10 years as pope.

In a year in which the world has watched on as Ukraine came under attack and millions have fallen into hardship, he used his traditional Christmas Eve address to call for sweeping changes in society.

He said: ‘While animals feed in their stalls, men and women in our world, in their hunger for wealth and power, consume even their neighbours, their brothers and sisters.

‘How many wars have we seen? And in how many places, even today, are human dignity and freedom treated with contempt?

‘As always, the principal victims of this human greed are the weak and the vulnerable.

The pope used the occasion to call for the world’s vulnerable to be better protected (Picture: AFP)

‘This Christmas, too, as in the case of Jesus, a world ravenous for money, power and pleasure does not make room for the little ones, for the so many unborn, poor and forgotten children.

‘I think above all of the children devoured by war, poverty and injustice.’

The pontiff said the ‘the true riches in life are to be found not in money and power, but in relationships and persons’.

He called on followers not to be ‘overcome by fear, resignation or discouragement’, adding ‘at Christmas, God is poor – let charity be reborn’.

The pope, who has struggled with mobility issues in recent months, was pushed in a wheelchair by an aide and was seen holding a life-sized statue of the baby Jesus.

Tens of thousands are expected to crowd into St Peter’s Square today to hear Pope Francis deliver a second address on world issues and give his blessing.

The speech, known in Latin as Urbi et Orbi (to the city and to the world), generally is an occasion to review crises including war, persecution and hunger, in many parts of the globe.