Time for a revolution, it is in the air! Women are angry, grieving and outraged by police and government attempts to patronise us like needy, insecure children. Feminism interrupted, we ain’t having it anymore, the suffragettes are coming for you!

And this time it’s not just the misogynistic-fuelled Westminster Government or the disgraced Metropolitan Police in the firing line; north of the English border the Scottish Government and Police Scotland are just as culpable.

They have all tried to coerce and push us online, yet some of those brave souls who dared to resist and hold vigils in person for the memory of murder victim Sarah Everard were met by disproportionate force.

The scenes which unfolded on Clapham Common on Saturday have brought world attention to brutal policing methods in the English capital, but Police Scotland can by no means sit back complacent.

Just last week Rangers fans, predominantly men, caused thousands of pounds worth of damage as they gathered in George Square to celebrate the club’s league win.

Officers from Police Scotland stood by as thousands of the rowdy, ebullient and some drunk fans flouted social distancing laws. While there were a few arrests later in the day, the very same force made it clear they would not tolerate a silent vigil by women on Saturday.

Both the Scottish Government and Police Scotland warned organisers not to breach coronavirus regulations by gathering in public for the vigil. Why were they not as forceful ahead of the inevitable Rangers’ celebrations?

Dismiss us as they might wish, the mood of women on both sides of the Border has changed and we will not be silenced … not by the police, governments or anyone else.

Apart from Aunt Lydia’s in our midst (the likes of Home Secretary, Priti Patel and Met Police Chief, Cressida Dick) just about all women can relate to violence against women. Many have their own personal stories to tell while others have listened too or shrunk behind the sofa to avoid being caught up in male violence.

Sarah Everard’s murder – at the hands of a police officer from the already sullied Metropolitan Police Force – has ripped open this previously one-sided conversation.

Sarah’s death has also triggered uncomfortable conversations about race as well. While what happened to Sarah could happen to any woman, black and other women of colour know if the same thing happened to them there wouldn’t be the same outrage or media coverage.

Many people reading this will feign offence and display their white fragility while insisting they’re not racist, but the truth is violence against black women is simply not taken as seriously.

If you want proof, cast your minds back to last year when two sisters of colour were murdered in a London park. Officers from the Met Force took selfies with their dead bodies, uploading the gruesome images to a WhatsApp group.

Why on earth did police at the scene do this? The public response at the time was largely muted.

At the time Sarah Everard was still a statistic in Missing Persons, the Scottish Government was debating the Hate Crime and Public Order (Scotland) Bill which has generated concerns over freedom of speech.

The bill would consolidate a number of laws into one piece of legislation, but would also add the offence of “stirring up hatred” on the grounds of religion, sexual orientation, age, disability and transgender identity. The offence already exists for race under the 1986 Public Order Act.

Labour MSP Johann Lamont lodged an amendment to protect women by proposing to add “sex” as a protected characteristic under the bill, but this was defeated 68 votes to 53. Lamont said the case for including women was “indisputable” and that the hatred of women was “commonplace”.

Of course now, with an election looming, SNP politicians are telling anyone who will listen that they are incomplete solidarity with we women … rubbish! If that is the case why didn’t they support Lamont’s Amendment?

It is sad to believe 68 members of the Scottish Parliament refused to accept women needed protecting despite the fact 118 have been killed by men in the UK this year.

I bet if I asked any of the men in Nicola Sturgeon’s gender-balanced Cabinet how many Covid injections have been performed to date, they would answer with precision accuracy … but do they know exactly how many women have been killed by men in Scotland in the last ten years or even the last 12 months?

The answer will be “No” simply because those are statistics few politicians seem interested in.

Labour’s shadow domestic violence minister in Westminster, Jess Phillips, believes society has “just accepted” dead women as “one of those things” as she read out the names of murdered women and girls during an International Women’s Day debate last week.

Some women in Scotland did tie ribbons to trees and fences at four locations in Glasgow, after the UK-wide cancellation of the peaceful vigils in memory of Sarah Everard. Similar actions were carried out elsewhere while other events planned by the Reclaim These Streets campaign moved online.

Until we can demonstrate peacefully once more, women feel silenced by the authorities but it is only a matter of time before curfews are lifted.

There are elections coming in May in the Scottish Parliament and if the SNP want to get that much-needed majority, I suggest they start prioritising the rights of women and a progressive strategy to protect us all from violent men. 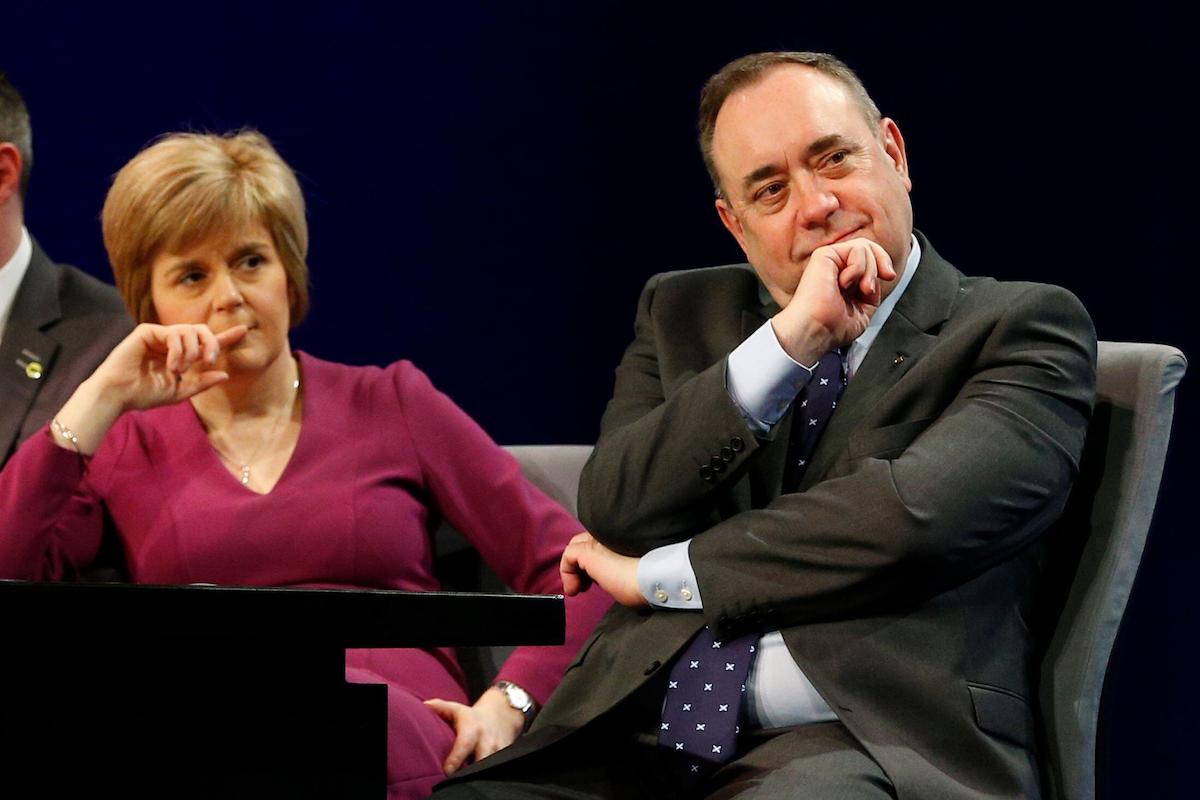 Treating us like children and speaking down to us like victims is not the way to engage women in the 21st century. Nicola Sturgeon needs to ‘woman up’ and realise that more than half her electorate is hacked off at not being taken seriously.

And it’s not just me, others including  organisers of vigils and protests complain of being dismissed as though “our grieving is frivolous and unnecessary.”

A member of the campaign group Sisters Uncut said: “We will not be silenced, we will not ask for permission or be told what to do by a violent man or violent institutions. “Safety is being used as a reason to shut down the protest, but every three days a woman is killed by a man,” she said. “We have a human right to protest, and that’s what we will do.”

The occupants of Holyrood today have an opportunity to seize the moment and make a difference and if they don’t be sure the women of Scotland will take the initiative.

Just as the George Floyd murder triggered a wave of activism around the world and turbo-charged the Black Lives Matter movement, the killing of Sarah Everard has created one of those seismic moments in history.

Men’s violence against women is the leading cause of the premature deaths of women around the world today, usually as a result of domestic violence, tyranny, persecution and war.

We, women, are angry and we are exhausted and politicians should ignore us at their peril. This goes for all women regardless of skin colour, nationality, culture or faith … none of us are seeking privileged treatment but we want to feel safe on the streets and in our own spaces without constant fear from men.

Most women will feel the impact of stigma and discrimination at some time in their lives just as we all have experienced moments of fear on dark nights as we walk alone. That sort of fear threatens our freedoms and liberties.

Looking back through photo archives women’s rights campaigners have been relentless in highlighting inequality, hate crimes and domestic violence. Images of police laying into suffragettes 110 years ago reveal that progress has been slow and painful.

Lessons are not being learned. Gender-balanced governments, boardrooms, workplaces are meaningless if the patriarchy is still at play, pulling the strings at the top.

As soon as we can, women will take to the streets with a view to challenging and changing bad behaviour by men. Strong female role models are of no use to any woman, regardless of colour, if they simply are cosmetic tools of the patriarchy.

I mentioned ‘Aunt Lydia’ types before. The real traitors in our midst as portrayed in The Handmaid’s Tale are the Aunt Lydia’s of this world like Metropolitan Police Commissioner Cressida Dick, the late Margaret Thatcher, the lamentable Theresa May and the fearsome Anne Widdecombe. Not one of them has proved to be a good role model, just a worthy servant of the ever-present misogyny lurking about in the corridors of power, today.

To politicians of all stripes, I would say cut the talk about equality and fairness being central to every piece of legislation to tackle gender discrimination unless you follow up your words with actions.

Sort out the equal pay gap right now. Make it illegal to have pay deferential based on sex. Make the streets and homes safe environments for all women and introduce a police force that represents and reflects the society it polices.

As the suffragettes used to say: Deeds not words.

* British journalist and author Yvonne Ridley is one of the founders of Women in Journalism and a patron of the Khadija Leadership Network.