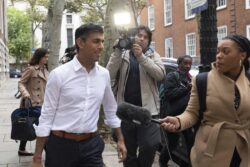 He is Britain’s first British Asian PM and addressed the nation from outside No10. He met with King Charles on Tuesday where he was officially appointed PM.

Rishi Sunak then embarked on his cabinet reshuffle – bringing together people from across the Tory party. He and his cabinet met for the first time on Wednesday morning.

How to watch PMQs live today

You’ll be able to watch Mr Sunak’s first PMQs via on a live stream on this page, while it is also broadcast live on the UK Parliament YouTube channel.

What time is PMQs today

PMQs starts at its usual time of midday and will last roughly half hour.

What can you expect from Rishi Sunak’s first PMQs?

Sunak will be facing some tough questions today – everything from the October fiscal statement, to the reappointment of Suella Braverman.

Sir Keir will be on the attack at PMQs and will tell Labour MPs that Sunak is a weak PM who will always put the Tory party before the country.

There is expected to be multiple calls for a general election.

There will be comments about his appointment – and lack of voting – and no doubt comments will be made about the short premiership of Liz Truss.