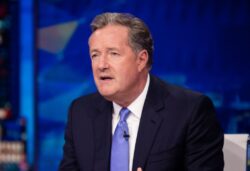 Piers Morgan has spoken out about Jeremy Clarkson’s column for the first time (Picture: Rex Features)

Piers Morgan has weighed in on the controversy surrounding Jeremy Clarkson and his vitriolic column about Meghan Markle, but insists he isn’t ‘defending’ the TV star.

Clarkson, 62, is at the centre of a storm after expressing his ‘hate’ for the Duchess of Sussex in his latest column, and writing of how he ‘dreams’ of her being ‘paraded’ through the streets of Britain naked while crowds chant ‘shame’ and ‘throw excrement’ at her.

The article, which was published by The Sun before being removed, has now become the most-complained about article with the Independent Press Standards Organisation (Ipso), after attracting more than 17,000 complaints.

Morgan, who is one of Meghan’s most outspoken critics, has now addressed the controversy and tweeted on Tuesday: ‘Imagine if all those screaming with rage about Jeremy Clarkson felt the same protective anger towards those who’ve branded our Royal Family callous lying racist bullies – without producing any actual evidence for these cruel allegations?’

One Twitter user then questioned Morgan’s seeming lack of criticism for Prince Andrew, who stepped back from royal public duties following accusations of sexual assault from Virginia Guiffre, which he vehemently denied.

Imagine if all those screaming with rage about Jeremy Clarkson felt the same protective anger towards those whoâve branded our Royal Family callous lying racist bullies – without producing any actual evidence for these cruel allegations?

Oh dear. Iâve rather put my foot in it. In a column I wrote about Meghan, I made a clumsy reference to a scene in Game of Thrones and this has gone down badly with a great many people. Iâm horrified to have caused so much hurt and I shall be more careful in future.

When one commentator suggested Morgan ‘wouldn’t want any women to have nasty things thrown at them’, the journalist replied: ‘I wouldn’t, no. I’m not defending what Clarkson wrote, I’m just asking where the same anger is towards the lies/smears hurled at the Royal Family.’

Morgan himself quit ITV’s Good Morning Britain in 2021 after receiving a record-breaking number of Ofcom complaints for his criticism of Meghan.

Clarkson spoke out amid the furore on Monday but did not offer a direct apology for his words.

Instead, he tweeted: ‘Oh dear. I’ve rather put my foot in it. In a column I wrote about Meghan, I made a clumsy reference to a scene in Game of Thrones and this has gone down badly with a great many people. I’m horrified to have caused so much hurt and I shall be more careful in future.’

Clarkson, 62, said he was ‘horrified’ that he caused great upset, but did not directly apologise (Picture: Rex Features)

Meghan has not publicly addressed the controversy (Picture: AFP via Getty Images)

His article was taken down on Monday evening and has now reached a record-number of Ipso complaints.

There are mounting calls for Clarkson to be dumped from hosting his spate of TV shows, such as ITV’s Who Wants To Be A Millionaire? and The Grand Tour on Amazon Prime Video.

A large number of MPs have also called for the presenter to be axed, with John Nicholson, SNP shadow culture secretary and MP for Ochil and South Perthshire, labelling Clarkson’s comments ‘grotesque’.

Sharing his letter on social media, he wrote that ‘as a member of parliament and a journalist by profession, I have consistently defended the freedom of the press. However, this has crossed a line’.

‘Using the names of a democratically elected First Minister of Scotland and the Duchess of Sussex alongside that of a serial killer is grotesque,’ he continued.

‘Expressing a scatological, misogynistic fantasy that Meghan Markle might be assaulted with faeces is an insight into a disturbed mind, openly expressing violence hate speech.

‘I do not believe that Mr Clarkson should appear on our television screens again,’ he added.


MORE : Jeremy Clarkson’s article about ‘hating’ Meghan Markle most complained-about ever as Ipso gets more than 17,000 complaints

The Uncensored host has weighed in on the controversy.