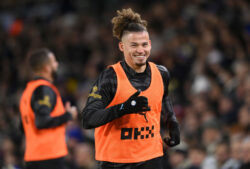 Pep Guardiola has hailed ‘so sexy’ Kalvin Phillips after criticising him for coming back from the World Cup overweight.

The Manchester City boss made the surprise claim about his midfielder after he returned from England’s campaign in Qatar, saying the former Leeds man was not even ready to train.

‘He’s not injured – he arrived overweight,’ Guardiola said last week. ‘I don’t know [why]. He didn’t arrive in the condition to do training sessions and to play.’

Phillips was on the bench against his former club Leeds on Wednesday night, and although he didn’t get on the pitch, Guardiola suggested he is getting back into shape quickly.

‘He has the perfect body, so sexy!’ Guardiola said of the man known as the Yorkshire Pirlo. ‘We will see for the weekend.’

The 27-year-old has barely played since arriving from Leeds in the summer, mainly due to injury, but Guardiola has also suggested that Phillips must adapt to City’s style of play before he can play more regularly.

‘He has spent the first part of the season out with surgery to arrive for the World Cup – and did everything to get to the World Cup,’ said the Spaniard.

‘It’s not just about just being fit you also have to understand what we want to do, the movements etc.

‘But I’m happy that yesterday for example Kalvin trained really well and sooner or later he will play.’

‘As quick as possible he he will play.’